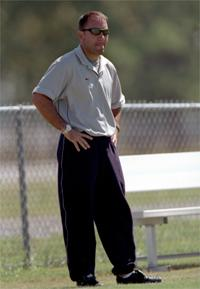 BATON ROUGE — The LSU soccer team needs a win or a tie against the Arkansas Lady ‘Backs on Sunday to qualify for its fourth Southeastern Conference tournament in eight years as the Western Division rivals square off at 2:30 p.m. at the LSU Soccer Complex.

Sunday’s crucial match will be televised live by SEC-TV on Fox Sports Net and is being billed as the School Daze Promotional Party where school-age kids will receive a free LSU sports pen-and-pencil set. The Tigers will also honor four valuable players that are making their final starts at the LSU Soccer Complex with a special post-game senior ceremony.

“This is a huge game with a lot of implications,” said LSU head coach George Fotopoulos. “Both teams are fighting for a spot in the SEC Tournament and its going to be an emotional day for our seniors and our team in general. One of our goals this season was to qualify for the postseason and we can accomplish that with a win tomorrow.”

LSU heads into Sunday’s matchup with an overall record of 11-4-2 on the season and a 2-3-2 mark against conference opponents. The Tigers are currently the third-place team in the SEC West and hold a slight advantage over Arkansas in the race for the eighth-and-final spot in the SEC Tournament.

The Lady ‘Backs come to Baton Rouge with a 7-12 overall record and a 3-5 mark against SEC foes. Last week, Arkansas staved off elimination from the conference tournament by posting a 4-3 comeback victory over Vanderbilt in Fayetteville, Ark. The Lady ‘Backs overcame a 3-1 second-half deficit to knock off Vanderbilt.

“Arkansas is a very dangerous offensive team and they have a lot of scoring options,” Fotopoulos said. “They put a lot of pressure on a defense because of their passing ability and they have some good overall team speed. We’re just going to have to come out and play the same kind of physical defense that we’ve been playing all season.”

LSU trails Arkansas, 4-3, in the all-time series between the two SEC Western Division rivals. Arkansas gained the advantage last season with a 6-5 shootout victory in overtime at Lady ‘Back Field. The teams have played four times at the LSU Soccer Complex with the Tigers holding a 3-1 record at home.

LSU’s Mandy Heintz, Leigh McGovern, Ashley Mitnick and Melissa Shelton will be honored with a special “Senior Day” presentation after the game on Sunday.

The four-year players will be recognized for their hard work and dedication over the years and for helping to revitalize the LSU soccer program. Since their arrival in 1999, the four Tigers have each played a key role in LSU’s success and have helped post a 37-33-6 overall record.

“There really aren’t any words to describe how much these players have meant to this program,” said Fotopoulos. “They have each been an extreme pleasure to coach and it’s easy to say that they are the backbone of this team. Not only are they very good soccer players, but they are excellent students and just great people.”

LSU and Arkansas will compete for the final spot in the 2002 SEC Tournament on Sunday, Nov. 3, at 2:30 p.m. at the LSU Soccer Complex.