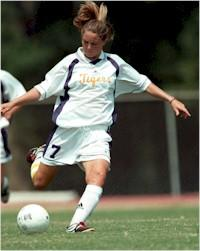 BATON ROUGE — The LSU soccer team upped its undefeated mark against in-state opponents to 15 consecutive games on Friday as the Tigers shutout the Louisiana-Lafayette Ragin’ Cajuns, 2-0, at the LSU Soccer Complex.

“We got everything that we wanted out of our team tonight,” said LSU head coach George Fotopoulos. “We were able to go deep into our bench, we got a victory and it was a much-needed win for us. Beating ULL was a huge momentum builder because they have kind of been our archrival and they played us tough tonight.”

LSU’s Stephanie Keating reached a personal milestone against Louisiana-Lafayette on Friday as she set the single-season assist record of 10 with a key pass on the Tigers’ opening goal. At the 34:41 mark in the contest, Keating took a pass from Mandy Heintz and touched the ball perfectly to Elizabeth Marschall for the game-winning score.

With the record-setting assist, Keating moved past former Tiger great Jackie Cooper into first place on LSU’s single-season assist record. The Tigers’ junior from Vero Beach, Fla., is currently ranked second in the Southeastern Conference with 10 assists on the season.

“I’m very pleased with how our team played tonight and with the result of the game,” Fotopoulos said. “We probably could have scored more goals. I think that we missed some opportunities late in the game, but we played well and I’m content with the victory. Right now we just have to get ready for a big game against Arkansas on Sunday.”

LSU (11-4-2) won its ninth-consecutive home game against an in-state opponent on Friday and remained undefeated against Louisiana schools in 15 contests. The Tigers have not lost an in-state matchup in more than three years since falling to Tulane, 3-0, in 1999.

With the loss, Louisiana-Lafayette snapped its two match winning streak and fell to an overall record of 6-8-3 on the season. The Ragin’ Cajuns have yet to score a goal against LSU and have been outscored 9-0 in three losses against the Tigers.

“We just wanted to come out and get a win tonight,” said Fotopoulos. “We know that we have a huge game coming up against Arkansas on Sunday, so we rested some players more than we usually would, but everyone played well. We didn’t have any serious injuries, we got a victory and we should have some more confidence after tonight.”

LSU’s Melissa Shelton returned to action on Friday night and scored her second goal of the season at the 57:32 mark in the match. The Tigers’ senior made her first start in six games after suffering a high-ankle sprain against Ole Miss and added some vital depth to LSU’s front line.

On the goal, Shelton gathered a deflected pass in the box, juked a Ragin’ Cajun defender and blasted a shot inches out of the reach of Louisiana-Lafayette’s talented goalkeeper Liza Preseault. Preseault recorded 16 saves in Friday’s in-state matchup including 10 in the second half of play.

The Tigers outshot Louisiana-Lafayette, 28-2, and registered 11 corner kick opportunities, while the Ragin’ Cajuns were held without a corner kick on Friday.

The LSU soccer team will next be in action on Sunday, Nov. 3, as the Tigers host the Arkansas Lady ‘Backs at 2:30 p.m. in a decisive SEC matchup at the LSU Soccer Complex. The winner of the contest will earn a berth in the 2002 SEC Tournament beginning on Thursday, Nov. 7, in Oxford, Miss.

Sunday’s crucial match will be televised live by SEC-TV on Fox Sports Net and is being billed as the School Daze Promotional Party where school-age kids will receive a free LSU sports pen-and-pencil set.