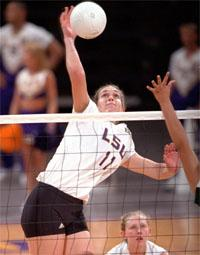 BATON ROUGE — Riding a three-match winning streak, the LSU volleyball team looks to make a season sweep of the Auburn Tigers on Friday at the Pete Maravich Assembly Center at 7 p.m.

As part of “Bengal Belle Night”, members of the Bengal Belles get in free with their membership cards and their guests are admitted for $1.

LSU (13-7, 5-4 SEC) has now won three straight Southeastern Conference matches and four of its last five, dropping only a four-game match to No. 3 Florida in Gainesville, Fla. The Tigers swept Ole Miss and Mississippi State last weekend after beating Georgia in five games on their court a week earlier.

“Like every match at this time of year, this is a vital match for us,” said LSU head coach Fran Flory. “We need to get in and get out and take care of our business.”

Auburn (1-21, 0-10 SEC) has lost 16 straight and is winless in conference play. AU had lost 36-straight games until last week when it took Alabama to five games, ultimately losing 15-13 in the fifth game.

Three weeks ago LSU defeated Auburn in a tight 3-0 match on the road. Auburn led midway through each game before LSU rallied to sweep the match.

“Auburn is playing much better now than when we played them before,” said Flory. “We can’t overlook them and focus all our energy on our match with Alabama on Sunday. No team wants to finish the conference schedule without a win so we know Auburn is coming in here with nothing to lose and looking for the upset.”

In its first meeting with Auburn, LSU was led by Kyra Lancon and Rachel Vogt with 11 kills each. Vogt also had 10 digs for her first career double-double. Jenny Greco was the only other LSU player in double-figures with 10 digs.

Cara Causey added eight kills for the purple and gold, while Regan Hood was the leading blocker for LSU with four blocks.

If LSU defeats Auburn on Friday, the Tigers will be looking to clinch a spot in the eight-team SEC Tournament on Sunday in a key western division showdown with Alabama at 1:30 p.m. in the PMAC. Prior to the start of the match, the team will honor its five seniors as part of the “Senior Day” festivities.