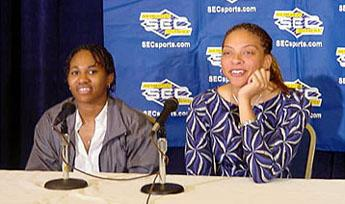 BIRMINGHAM, Ala. — The LSU Lady Tigers were picked second in the annual preseason poll of media members on hand here Wednesday for the league’s annual “Basketball Tipoff” media day at the Birmingham Sheraton Civic Center.

The Lady Tigers, who received five of 32 votes as league champion, was second with 110 points, behind Tennessee, the perennial league favorite. The Lady Vols were voted first on the other 27 ballots and totaled 37 points. Vanderbilt was third with 130 points, edging out fourth choice Georgia (135).

LSU guard Temeka Johnson was named on 12 ballots, earning one of the six pre-season media selections for first-team All-SEC, including one vote for player of the year. Johnson, a junior from New Orleans, averaged 11.1 points and 7.5 assists per game last year for the Lady Tigers who advanced to the second round of the NCAA Tournament.

Joining Johnson on the first team were LaToya Thomas of Mississippi State, Kara Lawson of Tennessee, Chantelle Anderson of Vanderbilt, Kara Braxton of Georgia and Jocelyn Penn of South Carolina. Thomas and Lawson were named on the most ballots, 28, and Braxton and Penn tied for the final spot on the first team. Anderson of Vandy was named on 14 ballots to be the league’s Player of the Year.

The second team featured Aiysha Smith of LSU, a senior from Detroit, who averaged 15.9 points and 7.7 rebounds a contest a year ago along with Tan White of Mississippi State, Vanessa Hayden of Florida, Gwen Jackson of Tennessee and Shameka Christon of Arkansas.

The Lady Tigers open exhibition play at the Maravich Assembly Center on Nov. 8 at 7 p.m. against the Basketball Travelers.