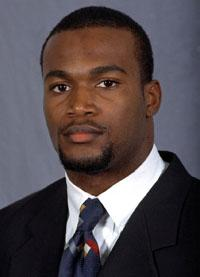 BATON ROUGE — LSU linebacker Bradie James made the cut for another national award as he was named a semifinalist for the Lombardi Award, the awards committee announced on Wednesday.

A senior from West Monroe, James is one of 12 players to make the list of semifinalists for the Lombardi Award, which is presented annually to college football’s top lineman or linebacker.

Last week, James was one of 11 players to make the cut for the Butkus Award, which is awarded each year to college football’s top linebacker.

He leads LSU and ranks second in the Southeastern Conference with 100 tackles, including 7.5 for losses. James, who has recorded 100 or more tackles in three straight seasons, ranks third in school history with 363 career tackles.

James also has two sacks, one interception, one forced fumble and 11 quarterback pressures for the 15th-ranked Tigers this year.

James is one of only three players from the SEC on the list of semifinalist. Other SEC players among the 11 semifinalists include Boss Bailey and Jon Stinchcomb, both of Georgia.

The 12 semifinalists were selected in a vote of over 400 members of the Rotary Lombardi Selection Committee. The winner of the award will be announced at a dinner in Houston on Dec. 11.