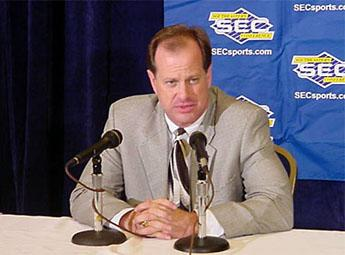 BIRMINGHAM, Ala. — The LSU men’s basketball team picked up its highest preseason ranking in years from the media Wednesday at the annual “Basketball Tipoff” event at the Birmingham Sheraton Civic Center.

The LSU men are picked to finish third in the Western Division of the SEC. The Tigers finished with 126 points in the voting on 40 ballots. Alabama, the choice of 30 ballots to finish first in the West, had 54 points and Mississippi State was second at 93 points and eight divisional first place votes. Ole Miss, picked first on one ballot, was fourth at 143 points, followed by Arkansas (211) and Auburn (213 and one first place vote).

On the Eastern side, Florida, Georgia and Kentucky split the 40 votes with Florida on top with 59 points, followed by Georgia (87) and Kentucky (99). The voters then picked South Carolina fourth (180) with Tennessee fifth (190) and Vanderbilt sixth (225).

Alabama was picked by 20 voters to win the league with Florida and Georgia on four ballots each to capture the overall crown.

The All-SEC first team chosen by the media was Erwin Dudley of Alabama, Mario Austin of Mississippi State, Jarvis Hayes of Georgia, Maurice Williams of Alabama and Brett Nelson of Florida.

Just missing by one vote of making the first team was LSU’s Ronald Dupree, the senior from Biloxi, who averaged 16.2 points and 8.5 rebounds a game a year ago in earning second team All-SEC honors for the second straight season. Joining Dupree on the second team were Matt Bonner of Florida, Keith Bogans of Kentucky, Ezra Williams of Georgia and Derrick Zimmerman of Mississippi State.

Dudley received the most votes in the pre-season ballot for player of the year.

The Tigers, who advanced to the second round of the NIT a year ago and won seven of its last 11 games, open its exhibition season on Thursday, Nov. 7 at 7 p.m. in the Maravich Assembly Center against a team from Global Sports.