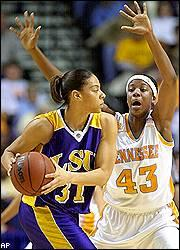 BATON ROUGE — LSU’s Lady Tigers basketball team received another high preseason ranking when www.womenscollegehoops.com tabbed them No. 4 in the nation, released Monday by the website.

The Lady Tigers are behind Duke, Tennessee and Texas Tech in the annual preseason Top 50 poll and are ahead of Purdue, Notre Dame, Kansas State, 2001-02 National Champion UConn, Georgia and Stanford, which rounds out the top 10.

The website’s write-up said, “The momentum this program has developed in the past four years looks set to take them to Atlanta and maybe then some. Legendary Coach, awesome point guard, lots of depth, experienced center, top recruit, returning veterans, dynamic twins, challenging schedule. We all may be asking why LSU was so underrated at No. 4.”

LSU has been in every early publication’s preseason top 10, including No. 3 by Street & Smith’s and the Women’s Basketball News Service.

The Lady Tigers open the 2002-03 season by hosting the Basketball Travelers in an exhibition game on Nov. 9 at 7 p.m. in the Pete Maravich Assembly Center. LSU opens the regular season at Arizona on Nov. 22 at 8 p.m. CST and opens at home against Florida Atlantic on Nov. 25 at 7 p.m.