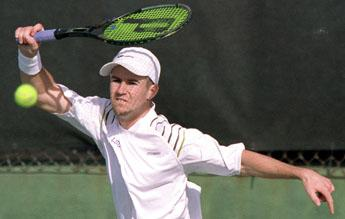 LEXINGTON, Ky. — LSU’s doubles tandem comprised of Bryan Fisher and Jason Hazley earned two victories at the 2002 ITA Region III Championships on Sunday to advance to the semifinal round of play here at the Hilary J. Boone Tennis Center in Lexington, Ky.

“I think that our doubles teams have been playing extremely well lately,” said LSU head coach Jeff Brown. “Bryan and Jason did an outstanding job of competing against some tough competition today and we came close to have two teams in the semis. Cory Ross and Seby (Rutka) also played some good tennis out there but lost in a tiebreaker.”

LSU’s combination of Fisher and Hazley opened up Sunday’s doubles action by defeating Vanderbilt’s duo of Chad Harris and Matthew Lockin in the round of 16, 8-6. The Tigers’ pair then knocked off Ole Miss’ ninth-seeded combination of Alex Hartman and Clais Lindholm, 8-5, to advance to Monday’s semifinal round of the ITA Region III Championships.

Fisher/Hazley will face Memphis’ fifth-seeded tandem of Ben Stapp and Lee Taylor Walker at 9 a.m. on Monday. Stapp and Walker advanced to the semifinals on Sunday by defeating two teams from the University of Alabama. Memphis’ pair dropped the Crimson Tide’s William Boyles and Chris Gostek, 9-8(8), and Maxim Belski and Brad Friedman, 8-3.

The Tigers’ doubles combination of Cory Ross and Sebastian Rutka came just a tiebreaker short of reaching the semifinals. After narrowly defeating Auburn’s No. 3 seeded Rameez Junaid and Rodrigo Minozzo, 9-8(3), LSU’s Ross/Rutka fell to Jacksonville’s tandem of Ben Birkmann and Christoph Mueller, 9-8(5), in the quarterfinal round of the doubles championships.

The 2002 ITA Region III Championships will resume on Monday at 9 a.m. with the semifinal round of the doubles competition here at the Hilary J. Boone Tennis Center in Lexington, Ky.