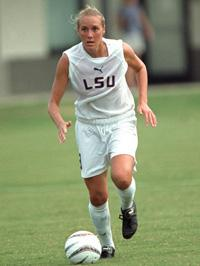 BATON ROUGE — The LSU soccer team will host its fourth-consecutive home contest on Sunday as the Tigers challenge the Kentucky Lady Wildcats at 1 p.m. in a crucial Southeastern Conference battle at the LSU Soccer Complex.

“We just have to come out as a team and work to the best of our ability,” said LSU head coach George Fotopoulos. “Kentucky is a very good team and they’ve been playing some exceptional soccer lately. We did a nice job of fighting for 110 minutes on Friday against Vanderbilt and now we need to take that intensity into tomorrow’s game.”

LSU heads into Sunday’s matchup with an overall record of 10-4-2 on the season and a conference mark of 2-3-2. The Tigers earned sole possession of third place in SEC Western Division on Friday by recording a hard-fought 1-1 tie against Vanderbilt.

The Tigers moved up in the divisional standings as both Alabama and Mississippi State lost home games against Florida and No. 16 Tennessee. Florida defeated Alabama, 2-0, while Tennessee knocked off Mississippi State, 2-1.

Kentucky comes to Baton Rouge after recording its second-straight SEC victory against Arkansas on Friday. With the resounding 3-1 victory, the Lady Wildcats improved to an overall record of 9-7 on the season and upped their conference mark to an even 4-4. Kentucky’s first three wins versus SEC competition came against Vanderbilt, 2-1, Florida, 3-0, and Mississippi State, 1-0.

“This is a very big game for us in that we are fighting for a spot in the SEC Tournament,” Fotopoulos said. “Every conference game is virtually a must-win and Kentucky is in the same position. We only have two SEC matches left this season and a victory tomorrow would be huge for us.”

LSU and Kentucky have faced off against each other six times in the seven-year history of the rivalry. The Lady Wildcats have dominated the all-time series by winning all six matchups by an average score of 3-0. The closest contest between the two schools came in 1998 as Kentucky held on to a 1-0 victory at the LSU Soccer Complex.

In the most recent contest between the two cross-divisional foes, Kentucky defeated the Tigers, 2-0, in the opening round of the 2000 SEC Tournament.

The loss put an end to LSU’s surprising 15-6 season under first-year head coach Fotopoulos. The Tigers were named the nation’s most-improved team in 2000.

The LSU soccer team will look to earn a vital SEC victory on Sunday against the Kentucky Lady Wildcats at 1 p.m. at the LSU Soccer Complex. The matchup is being tabbed as the Howl-O-Ween Pet Parade Party and fans are encouraged to bring their costumed pets to the park for a pre-game “Yappy Hour”.