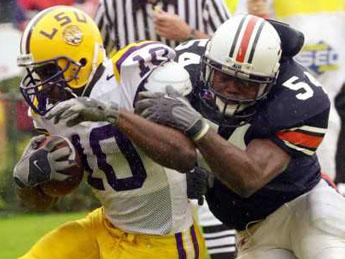 AUBURN, Ala. — After posing a plus-six turnover margin in a six-game winning streak, five LSU turnovers were Tigers’ the Achilles’ Heel on a dreary afternoon on The Plains, as the homestanding Tigers took advantage of positive field position to hand LSU a 31-7 defeat.

Auburn broke a two-game conference losing streak and improved to 5-3 overall and 3-2 in SEC play.

The LSU offense never was able to get on track — and was seldom seen on Auburn’s side of Jordan-Hare Stadium — as LSU running back Domanick Davis fumbled on the first play from scrimmage and starting quarterback Marcus Randall was intercepted four times in the wet contest.

The story of the game was the disadvantageous field position that weighed so heavily on an LSU defense unit ranked No. 1 in the nation in total defense coming into the game, but played without starting defensive end Marcus Spears and starting strong safety Damien James. James, a senior, was suspended indefinitely by coach Nick Saban, it was announced before the game.

Auburn became the first team to amass more than 275 yards against the LSU defense this season, but the Tigers were not forced to go a long distance for scoring drives that started on the LSU 28, LSU 19, LSU 22 and Auburn 45. Also, the LSU defense twice held Auburn to field goal attempts. Auburn was 1-of-3 with misses from 46 and 34, and a made attempt from 19. Auburn finished with 321 yards of total offense.

Campbell finished 7-of-11 for 105 yards and a touchdown pass to tight end Robert Johnson.

Randall was 9-of-20 for 79 yards and four interceptions, with his favorite target being Jerel Myers (three receptions for 44 yards). Randall also rushed for 74 yards on 16 carries, while Joseph Addai had 44 yards on 10 carries and a touchdown.

Domanick Davis was held to 42 yards rushing on 14 carries, while adding nine yards on a punt return and 48 on two kickoff returns.

Auburn won the toss and elected to defer until the second half, giving LSU the ball to start the game defending the South endzone.

With a steady rain falling, Davis ran the kickoff from the endzone to the 31-yard line. On the first play from scrimmage, Davis coughed up the ball in the middle of the field at the 32 to give Auburn the ball deep in LSU territory.

The LSU defense only allowed three yards on the drive and forced placekicker Philip Yost to attempt a 46-yard field goal. It was missed wide left.

On the ensuing possesion for LSU, Randall drove the Tigers down the field in nine plays to the Auburn 32. However, a deep pass intended for Jerel Myers was intercepted at the 8-yard line by safety Travaris Robinson and returned 64 yards to the LSU 28.

Three plays later, Brown ran untouched for a 5-yard touchdown. The point after attempt by Yost was successful and Auburn led 7-0 with 6:56 to play in the first quarter.

On LSU’s next possession, a block in the back on a punt that rolled into the endzone pushed the LSU Tigers to their 3-yard line to start the drive. Penalties pushed LSU to its 11 after gaining a first down to the 16 as the first quarter came to and end, and the Tigers were forced to punt from the 11.

Donnie Jones’ 37-yard punt was fumbled by Roderick Hood when he was hit by Ryan O’Neal. O’Neal recovered the fumble at the LSU 48, but the Tigers handed the ball back three plays later when Randall’s short pass to Davis was batted down and picked off.

Auburn went nowhere on its drive, but again pinned the Tigers deep in their own territory at the LSU 1. Randall’s third down pass was forced into coverage, intercepted by Donnay Young and returned to the LSU 19.

The LSU defense again stopped the Auburn offense after giving the War Eagles a first-and-goal at the LSU 5. Auburn settled for a 19-yard field goal by Yost and led 10-0 with 6:07 to play in the half.

Starting at its 20 after a touchback, the LSU offense was unable to get started and was forced to punt from its 15. After starting its drive on its 45, Auburn drove 55 yards for a touchdown, capped by a 13-yard run by Tre Smith. Auburn led 17-0 with 2:10 to play in the half.

To start the second half, Auburn and LSU traded a pair of punts until Auburn advanced 48 yards on a pass from Jason Campbell to freshman wide receiver Devin Aromashodo. Four plays later, Campbell rolled out of the pocked and found tight end Robert Johnson wide open in the endzone for a 3-yard touchdown. The extra point gave Auburn a 24-0 lead with 10:51 to play in the third quarter.

Auburn missed a 34-yard field goal midway through the third quarter to give LSU the ball at its 20 with 5:58 on the clock.

In the first sustained drive of the afternoon, Randall paced the LSU Tigers to a six-minute, 14-play drive to the Auburn 20 but again was foiled by an underthrown pass that was intercepted. Karlos Dansby stepped in front of Clayton for his second interception of the game and returned the ball to the Auburn 22 before Clayton clipped his heels.

LSU was able to put together a seven-play, 81-yard scoring drive halfway through the fourth quarter for its lone score. Joseph Addai rushed for 32 yards on the drive including an 8-yard touchdown run, while Randall connected with Myers for 21 yards to set up the score.

After an open date on Nov. 2, LSU returns to action on Nov. 9 when the Tigers travel to Lexington, Ky., to face SEC Eastern Division opponent Kentucky. The time for this matchup remains to be determined and will be announced on Monday, Oct. 28.