Rutka Falls in ITA Region III Round of 16; Doubles Advance 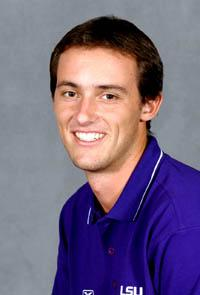 LEXINGTON, Ky. — LSU’s Sebastian Rutka had his seven-match winning streak snapped on Sunday as the Tigers’ junior fell to Ole Miss’ fifth-seeded Alex Hartman, 6-2, 2-6, 6-2, in the round of 16 here at the 2002 ITA Region III Championships in Lexington, Ky.

“Seby’s been playing some really good tennis lately,” said LSU head coach Jeff Brown. “He did a great job of winning his flight of the Tulane Invitational last week and I think that some of that confidence carried over to this week. I’m really pleased with how he has been playing so far during the fall season.”

Rutka, a native of Krakow, Poland, earned a victory over Tennessee Tech’s Gernot Fischer, 6-4, 7-5, in his first match on Saturday to advance to the round of 16 held at the Hilary J. Boone Tennis Center. Rutka owns an impressive 8-2 overall record during fall tournament action this season.

Bryan Fisher, ranked 68th in the nation, also turned in an impressive performance this weekend, as the junior from Nashville, Tenn., earned a berth in the round of 32. After rallying past his first two opponents in the singles competition of the Region III Championships, Fisher fell to Vanderbilt’s second-seeded Bobby Reynolds, 6-4, 7-6(4), on Saturday.

In doubles second-round play, LSU’s team of Fisher and Jason Hazley upended the No. 8-seeded team of Mark Henderson and Wade Orr of Tennessee, 8-3. Also, Rutka and Cory Ross upset the No. 11-seeded team of Janne Holmia and Eleazar Magallan of Florida, 8-6.

Fisher and Hazley will take on Vanderbilt’s team of Chad Harris and Claes Lindholm in Sunday afternoon’s Round of 16 matches, while Ross and Rutka take on third-seeded Rameez Junaid and Rodrigo Minozzo of Auburn.

The 2002 ITA Regional III Championships will resume on Sunday at noon with the quarterfinal round of the singles competition here at the Hilary J. Boone Tennis Center in Lexington, Ky.