It's Gameday on The Plains: LSU vs. Auburn 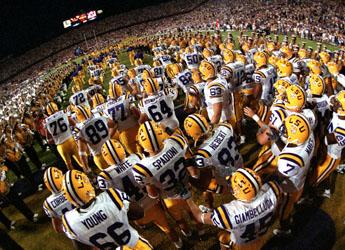 COLUMBUS, Ga. — Looking to win its seventh-straight game overall and eighth straight in conference, the 10th-ranked LSU football team travels to Columbus, Ga., for an overnight stay before playing Auburn on “The Plains” on Saturday at 11:30 a.m. CDT.

The game will be televised in the southeast region of the country by Jefferson Pilot Sports and will also be available to subscribers of ESPN’s “Gameplan” pay-per-weekend network. Fans who live outside of the southeastern U.S. should contact local cable companies for details.

Fans are also reminded that Daylight Saving Time ends Sunday morning at 2 a.m. CT. Set clocks back one hour at that time.

Live streaming online audio from the game featuring “The Voice of the Tigers” Jim Hawthorne and color analyst Doug Moreau will begin with the pregame show at 10 a.m. CDT. The pregame show also includes studio host Kevin Ford, sideline reporter Jordy Hultberg and producer David Hernandez. Archived video of the game will be available to members of www.LSUsports.tv on Sunday evening.

Nick Saban’s defending Southeastern Conference Champions are off to their best league start since the 1987 team began 4-0. With the No. 1-ranked defense in the country in terms of total defense (217.4 yds/game), LSU will attempt to match the streak by Mike Archer’s Tigers this weekend against an Auburn team that averages 31.9 points per game.

After losing starting running back LaBrandon Toefield (fractured radius) and starting quarterback Matt Mauck (surgically-repaired sprained ligament in right foot) earlier in the season, the LSU offense has not derailed. In fact, the Tigers have continued to improve offensively throughout the season, averaging 36.8 points per game since a season-opening loss at Virginia Tech.

During the current winning streak, LSU has scored 30 or more points six-straight times for the first time in school history. Even the great LSU team from 1908 that outscored its opponents, 442-11, on the way to a 10-0 season couldn’t boast of this feat.

Quarterback Marcus Randall had a brilliantly paced performance in his first start as a Tiger last week, completing 12-of-23 passes for 183 yards while adding 36 yards rushing and a touchdown on an option keeper.

Running back Domanick Davis continues to pick up the slack left when Toefield went down in the fifth game of the season with a broken arm. His 177.7 all-purpose yards per game ranks first in the SEC and third in the nation, and the Breaux Bridge, La., native is averaging 8.5 yards each time he touches the ball this season. This season, Davis has set the school’s career punt return (1,066) and career kickoff return records (1,836), accounting for 34.2 percent of LSU’s all-purpose yardage.