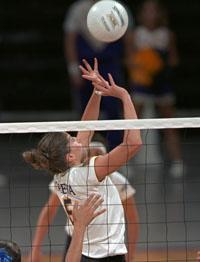 Fans are encouraged to wear purple as part of the “Powerade Purple” promotion to be eligible for great prizes from Powerade.

Midway through the conference schedule, the Tigers (11-7, 3-4 SEC) are currently in third place in the western division after returning from a successful trip through the SEC East last weekend. LSU defeated Georgia 3-2 in Athens after a competitive match against No. 3 Florida in Gainesville, becoming the first team to win a regular-season SEC game over the Gators since Sept. 21, 2001.

“There are several teams that are set up to make runs in the SEC right now,” said LSU head coach Fran Flory. “This is a vital weekend for us in the conference schedule. It is of utmost importance that we defeat Ole Miss at home on Friday and Mississippi State on Sunday if we are to remain competitive in our division.”

The Rebels (9-11, 2-6 SEC) split a pair of conference matches last weekend with a 3-0 win over Mississippi State before a close 3-2 loss to Tennessee. Ole Miss has had a tough schedule to start SEC play, with a pair of losses to nationally ranked Florida

“Ole Miss is one of the teams in our conference that is on the rise,” said Flory. “They have a new head coach and we will have to play well to defeat them, but it is a match that I think is crucial for us to win.”

Senior Jennifer Hampton leads the Tigers with 269 kills this season for a 3.90 kills per game average. She also leads the team in digs with 199 and digs per game. Earlier this season she became just the fourth player in school history to record 1,000 career kills and 1,000 career digs.

In a series that dates back to 1977, the Tigers have dominated the Rebels with a 34-9 overall record. From 1981-1994, LSU won 21 straight meetings. Currently, the Tigers have won two-straight and six of the last seven.

LSU will remain at home to face Mississippi State on Sunday at 1:30 p.m. in the PMAC. Fans are encouraged to wear gold to that match as part of the Winn Dixie Gold Rush to be eligible to win great shopping sprees from Winn Dixie.