Football Continutes to Prepare for Trip to Auburn 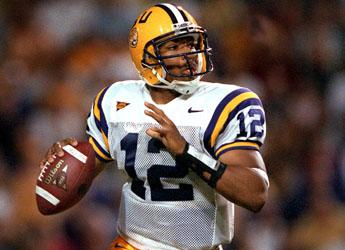 The Tigers, winners of six straight, enters the Auburn game sitting atop the SEC Western Division with a 3-0 league mark. LSU is 6-1 overall. Auburn, losers of its last two games, stands at 4-3 overall and 2-2 in conference action.

Last year, LSU posted a 27-14 win over Auburn in Baton Rouge to clinch its first berth in the SEC Championship game.

“Practice went well today and we’ve had a pretty good week,” LSU coach Nick Saban said. “I feel like we have had a business-like attitude this week in terms of what we are trying to do. The thing that we are trying to get the players to do is focus on each game, each play and each day and not think about some of the things which are the entertainment part of college football, like the BCS rankings and where we are going to end up.

“We are playing a good football team this week and they have a lot of good football players and I think they are capable of beating anyone they play. They historically play well at home so this is going to be a real tough challenge for us.”

Saban said the Tigers have a couple of players who are still questionable for Saturday’s game in sophomore defensive end Marcus Spears (ankle) and sophomore running back Shyrone Carey (shoulder).

“It will probably be a game-time decision on Marcus Spears,” Saban said. “He tried to jog a little bit today and is walking now without a boot. If he can run and practice tomorrow then there is some chance that he could play in the game but I would say it is questionable right now.”

Saban also addressed absence of senior free safety Damien. James, who has started the last six games for the Tigers, hasn’t been at practice all week.

“I have been coaching for 30 years, or close to it, and I have never had a guy on a team that is having success, who is a successful player, ever quit the team in the middle of the season, ” Saban said. “We are going to support Damien every way we can and help in every way we can, but obviously now he has missed three days of practice and I have not talked to him so I am assuming he quit the team. That is just an assumption on my part because I have never talked to him.”

LSU will practice again on Thursday followed by a walk-thru in Tiger Stadium on Friday before departing for Auburn. Kickoff for Saturday’s game is slated for 11:30 a.m. and will be televised to a regional audience by Jefferson Pilot.