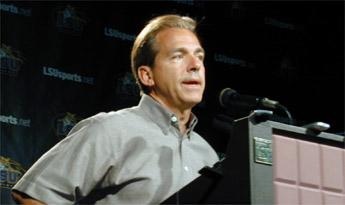 “It was obviously a very good win for us, especially the way we won the game. We came out and did not play very well the first half and did not seem particularly focused or ready for as physical a game as we had gotten in to. I was very proud of how the team came back in the second half and the third quarter. We gained control of the game and dominated the game and I think it was a real momentum boost that we got a field goal right before the half and for us to take the opening drive of the second half and march down and score and get the two-point conversion definitely got the crowd in to the game. I think the crowd had a tremendous effect on the momentum and emotion in the game, which is always a real positive for us here. Our team played with a different sense of urgency relative to the effort, energy and physical toughness that we played with from that time on and that certainly made a difference in the game.”

“I thought South Carolina was a very physical team, much more physical than I thought our players anticipated them to be. Sometimes you get surprised when you pick a fight with a guy and he is a little tougher than you thought. They certainly were and that is a tribute to Lou Holtz and his staff and their football players. I think it is very important for our team now stay focused because this is a very treacherous situation that we are in now in this league. Just about any team in this league can beat anyone else on any given day and I think anybody that starts thinking about outcomes and where we are going to go, and what we are going to do and where we are going to be three weeks from now is definitely setting themselves up for failure. Any time people start to focus on that they have a lot of problems and I think it happens time and time again in college football. It is certainly something that we are going to guard ourselves against relative to staying focused on the task at hand today, what we do today, tomorrow, or the next day. We are going to continue to play one game at a time and one play at a time. “

“This is a good football team that we are playing in Auburn. They score 31 points a game on offense and have over 400 yards of offense, equally distributed, with a little over 200 both ways. I think the strength of their team is their defense, which has played well and is a very good one. They have always been a pain on special teams because they have good players and are coached well. They do a lot of different things that take a while to work on. This is certainly going to be a challenging game for us, especially because it is on the road. This team is also the No. 1 team in our league as far as turnover margin, which I think is a real important statistic relative to success. This is not a time for us to think that we can look ahead, because as you climb the mountain and the higher you get the more treacherous it is. I think we all need to keep that in mind. We have had two very physical games two weeks in a row and this is probably as beat up as our team has been on a Monday all year long.

On the LSU injury situation….

“First of all Matt Mauck (right foot) had surgery yesterday. I meant to announce that Friday night when we found out that it was confirmed from several doctors that he would need surgery. It was done on Sunday and I meant to announce it Saturday after the game but nobody asked me about injuries and I forgot about it.”

“We have five guys that will be out of practice today. Marcus Spears, Eric Alexander, Kendrick Allen, Shyrone Carey and Travis Moses. We are hopeful that all those guys will be back to practice at least by Tuesday, but there are a couple of guys that me be questionable from that standpoint and will be re-evaluated on Tuesday.”

On CB Demetrius Hookfin being named SEC Player of the Week….

“We are very pleased and happy that Demetrius Hookfin was the conference player of the week. He had probably his best football game and had 23 production points on defense, which is a lot for a defensive back, and actually would have had a lot more had the last interception counted, where we got a penalty for roughing the passer.”

On the depth at the quarterback position….

“Behind Marcus Randall we have Rick Clausen and Michael Harrison and those are the two quarterbacks that we have right now and the ones we are going to work with and try to develop. We have one true freshman who is probably not ready to play and has not been working with the varsity and probably won’t until we need him to. I do not think very many people in the country have much depth there. You are lucky if you have one good quarterback and you are very fortunate if you have two. Most people don’t have three. We feel good about the guys we have and the situation that they are in and the improvement that they have made. We are going to keep working with them to try and get better.”

On how Auburn will react to losing RB Carnell Williams compared to how LSU reacted to losing both LaBrandon Toefield and Matt Mauck….

“First of all the guy (Carnell Williams) is a great player. I do not want in any way not give him every credit that he deserves as a football player because he is a great competitor and an outstanding player. But let’s not forget the guy that came in for him gained 163 yards rushing and caught a 50 or 60 yard touchdown pass that tied up the game. I would say their team responded the way they should respond and that is how I would expect them to respond.”