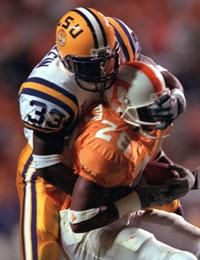 BATON ROUGE — For the second straight week a member of LSU’s “James Gang” defense has been tabbed as the Southeastern Conference Player of the Week as cornerback Demetrius Hookfin won the honor, the league office announced on Monday.

Hookfin, a senior from Kentwood, La., added seven tackles and three pass deflections for an LSU defense that allowed only 275 yards of offense to the Gamecocks, including just 63 in the second half. In the decisive third quarter, the Tiger defense limited South Carolina to just 1-yard of total offense. LSU outscored South Carolina 25-0 in the third quarter.

Hookfin, who has three interceptions this season, leads the SEC with 17 pass deflections this year. The SEC Defensive Player of the Week honor is the first of Hookfin’s career and comes just one week after LSU cornerback Corey Webster won the award after a three-interception performance in a victory over Florida.

Alabama’s Santonio Beard was named the SEC’s Offensive Player of the Week after rushing for 138 yards and five touchdowns in the Crimson Tide’s 42-7 victory over Ole Miss. Kentucky’s Derek Abner earned the league’s special teams player of the week award after racking up 213 all-purpose yards, including an 86-yard punt return for a TD, in a 29-17 victory over Arkansas.