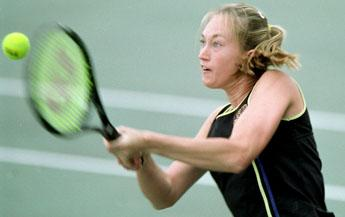 FORT WORTH, Texas — LSU’s doubles team comprised of Rocio Fantilli and Lauren Seaman advanced to the semifinal round of the 2002 Omni Hotels ITA Southwest Regional Championships on Sunday as the pair knocked off Tulane’s sixth-seeded tandem here in Fort Worth, Texas.

“This is a huge honor for our girls to be among the final four doubles teams in this region,” said LSU head coach Tony Minnis. “This is an extremely tough region to win in and our players have done an outstanding job this weekend. I’m very proud of how both Rocio and Lauren are playing right now and they have another big match tomorrow.”

At the Bayard H. Friedman Tennis Center on Sunday, LSU’s ninth-seeded duo of Fantilli and Seaman upset Tulane’s sixth-seeded pair comprised of Julie Morris and Ana Saaibi, 8-5, to advance to the semifinal round of the ITA Southwest Regional.

The Tigers’ tandem moved on to face TCU’s No. 2-seeded combination of Paty Aburto and Rosa Perez on Monday which will be played after the conclusion of the singles championship round. Aburto and Perez breezed by Texas Tech’s Kendall Brooks and Tara Browning, 8-3, on Sunday to advance to the semifinals of the four-day tournament.

During the morning competition, LSU’s Amanda Mang and Fantilli were each eliminated from the prestigious singles championships in three-set matches.

Mang, who upset Texas’ second-seeded Katie Ruckert on Saturday, was outlasted by Lauren Archer of Rice in the round of 16, 3-6, 6-2, 6-2, here in Sunday’s competition.

Fantilli, the Tigers’ powerful junior from Puerto Madryn, Argentina, defeated Julieta Lillo of Arkansas-Little Rock, 6-4, 7-6(5), before falling to top-seeded Julie Smekodub, 3-6, 6-0, 6-1, in the quarterfinal round. Tulane’s Smekodub is the 95th-ranked singles player in the nation.

The 2002 Omni Hotels ITA Southwest Regional Championships will resume on Monday at 9 a.m. with the singles championship matches which will be immediately followed by the doubles semifinal round here on the campus of Texas Christian University in Fort Worth, Texas.