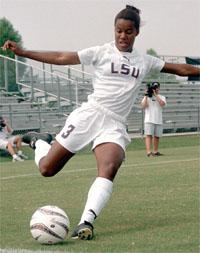 BATON ROUGE — LSU soccer players Artie Brown and Mandy Heintz each scored second-half goals in a 20-seconds span on Sunday but the Tigers were unable to surmount a three-goal deficit against Auburn, 3-2, here at the LSU Soccer Complex.

“We played against the best team in the conference today,” said LSU head coach George Fotopoulos. “There’s no question that Auburn is the best team in the Southeastern Conference right now, so I feel positive about the fact that we played hard and never gave up. We had our chances to come back at the end, but obviously I have to give full credit to Auburn.”

With the win, Auburn upped its SEC-leading record to 5-1 and improved its overall mark on the season to 13-3. Sunday’s victory proved to be the Tigers’ fifth straight against conference opponents after losing their SEC opener on the road against Tennessee, 4-2. Since Oct. 4, Auburn has reeled off convincing wins over Georgia, 1-0, Mississippi State, 2-0, Ole Miss, 3-1, Arkansas, 2-1, and LSU, 3-2.

LSU dropped to an overall record of 10-4-1 on Sunday and a 2-3-1 mark in conference play. The Tigers’ loss proved to be their third straight on the season and second-consecutive defeat at home at the LSU Soccer Complex. LSU fell to Alabama, 2-1, in an SEC Western Division matchup on Friday.

“Auburn is a great team,” Fotopoulos said. “They are very well coached and they are definitely going to win the SEC West and they have a good chance of winning the entire conference. They were very deserving of the win today. They came out and did the right things and played for the whole 90 minutes. We only played for 10 and that’s not going to cut it.”

With LSU trailing 3-0 late in the second half, the Tigers’ Tara Mitnick eluded a pair of Auburn defenders, wove her way down the field and rifled a shot at Megan Rivera, the 2001 SEC Player of the Year. Rivera made a diving save on Mitnick’s scoring attempt, but LSU’s Artie Brown gathered the rebound and recorded her fourth goal of the season on the putback.

At 80:16, only 20 seconds removed from Brown’s goal, LSU propelled itself back into the game as junior Mandy Heintz headed a pin-point crossing pass from Stephanie Keating into the back of the net to make the score 3-2. On the play, Heintz upped her SEC-leading goal total to 22 and Keating recorded her ninth assist of the 2002 campaign.

With the score of Sunday’s match at 3-2, Auburn entered its defensive specialists into the game and held on to its fifth-consecutive victory.

“We have to take a positive from this game and that’s the fact that we never gave up,” said Fotopoulos. “Even when the score was 3-0, we never let down and we fought back into the game. We’re still an extremely young team and we’re just going to have to continue to try and get better for every game.”

Auburn jumped out to its 3-0 first-half lead with goals from Chistina Culver, Sarah Steinmann and Jaqueline Schwarz. Culver’s goal started the scoring barrage at the 12:32 point in the contest, while Steinmann and Schwarz’ goals came at 15:26 and 37:57, respectively. Schwarz’ score proved to be her second game-winning goal of the season.

The LSU soccer team will next be in action on Friday, Oct. 25, as the Tigers continue their SEC schedule against the Vanderbilt Lady Commodores at 7 p.m. here at the LSU Soccer Complex. The contest is being tabbed as CC’s World of Coffees International Night and the LSU promotional team will be giving away cultural treats from countries around the world.