Tigers Move Into Top 10 After Improving to 6-1 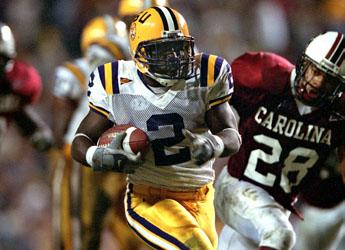 BATON ROUGE — For the first time this season, the LSU football team moved into the Top 10 in both the Associated Press and ESPN/USA Today Coaches’ Polls, coming in at No. 10 in each.

The first Bowl Championship Series rankings will be released on Oct. 21 at 5 p.m. CDT. LSU finished the 2001 season ranked 13th in the BCS standings, which are tabulated prior to the bowls.

Winners of six-straight and 12 of 13 games, the Tigers’ only loss this season came in the opening game at Virginia Tech. The Hokies are undefeated at 7-0 and ranked third in both polls this week.

This weekend, LSU travels to Auburn, Ala., to face the Tigers in an 11:30 a.m. contest to be televised by JP Sports.