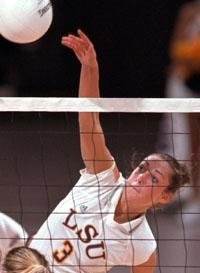 “This was the match that was important for us this weekend,” said LSU head coach Fran Flory. “I thought we maintained our level of play much better for the entire match against Georgia than we did on Friday against Florida.

“In this series over the past few years, one team has usually not played well and it has usually been the team that is expected to win. Georgia put up a tremendous fight today and it was probably one of our most exciting matches of the year.”

In addition to Lancon’s career-high kill mark, she recorded a career-high with six blocks, including two solo block and tied her career-high with three service aces. The sophomore from Houston committed only five errors in the match for a team-best .432 hitting percentage.

Sophomore Regan Hood also recorded in double-figures with 14 kills for the Tigers and had seven blocks. Cara Causey led the team with a career-high eight blocks.

Hampton recorded her 12th double-double of the season with 10 digs to go with her 24 kills. Rachel Pittman and Katie Kubena also were in double-figures with 13 and 12 digs respectively. Kubena also added three service aces for LSU.

Both teams were very effective at putting away the first ball in the first game. Neither team committed many errors, with the teams combining for only nine errors between them. There were only three blocks combined, while the pair recorded 36 kills between them.

LSU took the early lead, and led most of the game, but neither team could game more than a two-point advantage until late. With the game tied at 22, the Tigers used back-to-back kills by Hampton and Lancon and an ace by Hampton to take their largest lead of the game.

LSU maintained at least a two-point lead the rest of the way before taking the first game, 30-26, on a kill by Hampton and an error by Georgia.

After LSU came out and took an early one-point lead in game two, a breakdown in the LSU defense allowed the Bulldogs to mount a five-point run to give Georgia the, 12-7 lead. The Tigers rallied to within two points, 13-11, but the Bulldogs countered with a 4-1 run that extended the lead to seven points, the largest of the match.

LSU would not quit and cut the Georgia lead to four points on several occasions, but could get no closer. The Bulldogs went on to close out game two, 30-24, and tie the match at a game apiece.

The marathon third game started out with three consecutive kills and a block by Lancon on the Tigers way to a 5-0 lead. Georgia slowly closed in LSU, cutting the lead to two points, 7-5 before the Tigers stormed back with a 7-2 run and a 15-7 lead.

The Bulldogs then went on a 12-4 run that tied the game at 19 before taking their first lead of the game, 20-19. Georgia went on to take its largest lead of the match, 24-22 before LSU rallied back to tie the game at 28 each.

The Bulldogs went on to serve the first of 10 combined game points, 29-28, but a kill by Hampton tied the game at 29. Hampton added another kill for the Tigers’ first of three straight game points, but LSU could not convert.

Georgia then had three game points of its own, but could not close out the game before the Tigers were able to convert on their sixth game point on consecutive blocks by Hood and Kubena.

After hitting so well through the first three games, both team had dramatic drop offs in attacking percentages in game four, with LSU hitting at -.025 and Georgia hitting at .125. Like the Tigers had done in game three, the Bulldogs jumped out to an early 5-1 lead, but the Tigers slowly crept back into the game and tied it up at 16 before taking the lead 18-17.

With the game tied at 20, Georgia used three aces and two blocks to mount a 7-0 run that broke the game open. LSU had several key passing break downs during that run that led to easy Bulldog points as Georgia went on to win game four, 30-24 and send the match to the decisive game five.

LSU took the early lead in the fifth game, 7-5, but the Bulldogs rallied back to take the lead 8-7. The Tigers used two kills and an ace by Lancon to key a comeback that put them on top for good. With aggressive serving, LSU went on to take the match, 15-11.

LSU returns home from a four-game road trip an SEC series with Ole Miss and Mississippi State next weekend. The Tigers face the Lady Rebels on Friday at 7 p.m. and the Lady Bulldogs on Sunday at 1:30 p.m. in the Pete Maravich Assembly Center.