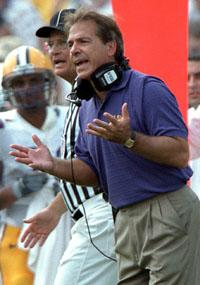 By David Steinle
Special to LSUSports.net

Due to the fact that Shreveport is an easy 260-mile drive from Baton Rouge, representatives from the Independence Bowl can be found in Tiger Stadium’s press box almost every week, scouting LSU and its SEC opponents in hopes of snaring one of those teams for their December bowl game in Northwest Louisiana against a Big 12 opponent.

Maybe the I-Bowl ought to stop sending representatives to Death Valley, because given the way LSU has played in 12 of its last 13 games, it doesn’t appear that the Tigers will be returning to that game anytime soon.

Yes, there were other bowl game representatives in Death Valley watching LSU and South Carolina, including the Capital One (formerly Florida Citrus) and Sugar Bowls, the top two destinations for SEC teams should the league not get a team in the national title game and/or a second team in the Bowl Championship Series.

But it was one bowl representative that proved to be a true barometer of the Tigers’ rising football fortunes.

For the first time this season, a gentleman in a pale yellow blazer was spotted in the press box. It just so happens the maize jackets are worn by the emissaries of the Tostitos Fiesta Bowl (although the Frito-Lay chip’s logo was nowhere to be found on the representative’s patch), which happens to be the home of the BCS national championship game on January 3 in Sun Devil Stadium.

LSU in the Fiesta Bowl? It’s still a longshot at this point, but it may not be as farfetched as Sun Devil Stadium’s National Football League entry, the Cardinals, reaching the Super Bowl.

LSU’s 38-14 victory over South Carolina that moved the Tigers to 6-1 makes LSU bowl-eligible for the third consecutive year, but more importantly, likely places the Bayou Bengals in a top 10 spot in at least one of the polls, and with the first BCS rankings set to be released at halftime of this week’s Monday Night Football contest between Indianapolis and Pittsburgh, the Tigers should be in the nation’s elite 15 teams.

In the Dunkel Index, one of the many power rankings used to calculate the strength of college football teams, LSU came into the week ranked second only behind defending national champion Miami.

The national championship picture took another jumble this week, with Iowa State getting knocked out of the picture following a 49-3 loss in Norman to second-ranked Oklahoma, and Oregon suffering a stunning 45-42 loss to, ironically, Sun Devil Stadium’s tenants, Arizona State.

Yes, LSU will have to win out to have any hope of Tempe, but given the way LSU has played in winning 12 of its last 13 games, nothing is impossible. The Tigers will need Miami, Oklahoma, Ohio State, Georgia, Notre Dame, Air Force, Michigan and Texas to fall by the wayside along with six more wins, but in this era of parity in the college game, who can say what will happen?

Even if the Tigers don’t have their ticket to Tempe in their hands, the road to the SEC championship became crystal clear by 10 p.m. on Saturday night.

Arkansas promptly squandered its chance to get back into the race by getting hog-tied (pardon the pun) in the Ozarks by Kentucky, Auburn dropped its second consecutive league game at Florida in overtime, and Ole Miss made sure its two-week stay in the polls wouldn’t reach three by getting fried 42-7 in Tuscaloosa by probation-bound Alabama.

LSU now heads to the Plains of Auburn needing to only win three of its final five league games to return to Atlanta for the SEC championship game on December 7. A Tiger victory over Auburn moves LSU to 4-0 in the league and virtually eliminates the Tigers of the Plains from the running, leaving a two-team showdown between the Tigers and the Rebels.

Think of the irony involved should the West come down to LSU and Ole Miss. In 1970, Archie Manning played his final regular-season game for the Rebels in Death Valley in front of the ABC cameras with an SEC title at stake. LSU hounded Manning and cruised to a 61-17 rout to seal the league title and an Orange Bowl berth.

Now, it could come down to Eli Manning’s final visit to Death Valley to decide the West, and LSU fans would love nothing more to avenge their embarrassment last year by beating the younger Manning for the trip to Atlanta.

But first things first-should LSU stumble against an Auburn team that may be playing for Tommy Tuberville’s job, all bets are off and the Tigers will be heading into the open week with a monster headache. However, LSU is not giving any hint of veering off the straight and narrow path to what would be the Bayou Bengals’ first back-to-back SEC championships in nearly 70 years.