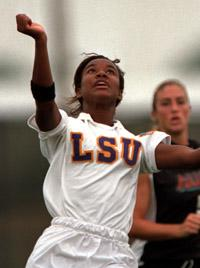 BATON ROUGE — The LSU soccer team will look to rebound from a pair of tough Southeastern Conference losses on Sunday as the Tigers host their Western Division rival Auburn at 2 p.m. here at the LSU Soccer Complex.

“We’re going to need to come out and play tough, physical soccer against Auburn,” said LSU head coach George Fotopoulos. “Auburn is strong team. They are very talented and they have a lot of speed. They’re leading the (SEC Western) division right now and this is a vital game for us, because a loss will make it tough for us to rebound in the division.”

LSU heads into Sunday’s SEC matchup in the midst of its first losing streak of the 2002 campaign. The Tigers own a 10-3-1 overall record but have dropped consecutive contests against South Carolina, 2-0, and Alabama, 2-1.

Despite the two-straight losses, LSU possesses a 2-2-1 mark against conference opponents.

The Auburn Tigers come to Baton Rouge as the top team in the SEC. Auburn leads the conference with a 4-1 record and has won its previous four games.

The Tigers have earned SEC wins over Georgia, 1-0, Mississippi State, 2-0, Ole Miss, 3-1, and Arkansas, 2-1. Auburn’s critical victory over Arkansas came in the second overtime period on Friday in Fayetteville, Ark.

“Auburn’s been doing a great job of winning all of its close games,” Fotopoulos said. “They haven’t been blowing any of their recent opponents out, but they’ve been playing good defense and have been consistent on offense. We have to remain confident in our ability to score and to keep other team from scoring and just play our game. We have a talented team that can match up with anyone we play.”

Auburn possesses a slight 4-3 lead in the all-time series between the two schools. The teams have played three games at the LSU Soccer Complex and LSU has been victorious in all three of the contests by an overall score of 5-1.

In last season’s annual matchup between the SEC enemies, Auburn posted a 2-0 win at home in Auburn, Ala.

LSU’s critical contest against the defending SEC Western Division champion Auburn Tigers will begin at 2 p.m. on Sunday, Oct. 20, at the LSU Soccer Complex. The matchup is being billed as Goalie Ghost Promotion’s Day and will feature a Halloween theme with tricks and treats for everyone.