It's GameDay: LSU vs. South Carolina 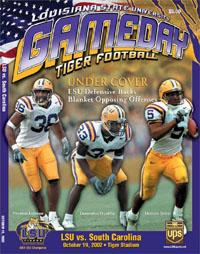 BATON ROUGE — One week removed from a 36-7 domination of Florida in “The Swamp,” the 12th-ranked LSU football team returns home to face the Southeastern Conference Eastern Division’s South Carolina Gamecocks on Saturday at 6:45 p.m.

The game will be televised by ESPN2 to a national audience. Audio from the game with “The Voice of the Tigers” Jim Hawthorne, Doug Moreau, Kevin Ford and Jordy Hultberg will be streamed live on LSUsports.net beginning with the pregame show at 5:15 p.m. Click on the “Audio” link under “Upcoming Events” on the LSUsports.net homepage or use the broadcast schedule to find the event.

LSU (5-1, 2-0 SEC), which is tied for the SEC Western Division lead with Ole Miss, will be led by first-time starting quarterback Marcus Randall. Matt Mauck, who injured his right foot after a tackle in the fourth quarter of the victory over Florida, will miss his first start of the season but is listed on the dress roster.

South Carolina (5-2, 2-1 SEC) enters Saturday’s contest on a four-game winning streak including last week’s 16-12 victory over Kentucky. The Gamecocks scored on three-of-three attempts in the red zone to come away with the road victory.

The last time the Tigers and Gamecocks met on the gridiron, the teams tied 20-20 in 1995 in what may be the final tie in LSU football history (under the current overtime rules of NCAA football).

The forecast for the game is partly cloudy skies with a high temperature of 81 degrees and a low of 63. There is a 30-percent chance of rain.