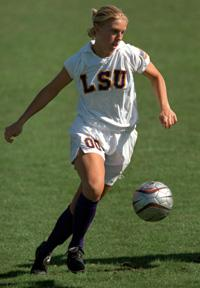 BATON ROUGE — The LSU soccer team lost its first home game of the 2002 season on Friday as the Tigers fell to the Alabama Crimson Tide, 2-1, here at the LSU Soccer Complex.

“It was a very disheartening loss for us, but I have to give all of the credit to Alabama,” said LSU head coach George Fotopoulos. “They emotionally and physically outplayed us tonight. I don’t think that our team was really ready to play and I think that we felt that we were going to win because of our past. We dominated the game early and everybody on the team just waited for it to happen.”

With the score of Friday’s vital Southeastern Conference match knotted at 1-1, Alabama’s Rebecca Baker gathered an attempted clear from the Tiger defense and blasted a shot passed LSU’s goaltender Robyn DesOrmeaux for the game-winning goal. The goal with 29:15 remaining in the contest gave Alabama its final 2-1 lead and proved to be Baker’s second score of the season.

The loss dropped LSU to an overall record of 10-3-1 on the season and a 2-2-1 mark in SEC play. Prior to Friday’s defeat, the Tigers owned a perfect 5-0 record at the LSU Soccer Complex and had outscored the opposition 36-0.

The loss also proved to be LSU’s second in a row.

“It’s a very unfortunate loss for us, because this is a critical point in the season,” Fotopoulos said. “We’re in the heart of SEC play and we know that a loss here and a loss there can put us on the brink of elimination from the SEC Tournament. We’re still a very good soccer team, but I think that we just had a bad night. I think that our defense played poorly and we didn’t do a very good job of clearing balls out.”

Alabama improved its conference record to 2-2-1 with the victory and upped its overall record to 11-3-1 on the season. The win snapped a Crimson Tide three-game winless streak and Alabama will remain on the road and travel to Fayetteville, Ark., for a Western Division matchup against the Razorbacks on Sunday.

The Tigers jumped out to an early 1-0 lead on Friday as junior Mandy Heintz scored her conference-leading 21st goal of the season. LSU’s forward from San Antonio, Texas, rebounded a deflected shot from Stephanie Keating and headed the ball over Alabama’s keeper Courtney Rogers into the net.

LSU’s lone goal of the evening came shortly after halftime at the 48:59 point in the game. With the goal, the Tigers scored first for the 11th time this season. LSU owns a 10-1 record when scoring first during the 2002 campaign.

The Crimson Tide recorded its first goal of the contest on a penalty kick by sophomore Katie French at 57:03. The kick was finally awarded by head official Mark Arblaster after originally marking the foul committed by freshman Tara Mitnick outside of the box. French’s ninth goal of the season tied the score at 1-1.

“The penalty kick, which was poor marking up on people by our defenders really hurt us, and then we had people on the second goal that didn’t clear the ball out well enough,” said Fotopoulos. “After we gave up two goals like that against South Carolina, it stung us again.”

With the victory, Alabama ended a two-game winless streak against the Tigers and upped its lead in the all-time series to 6-1-1.

The LSU soccer team will next be in action on Sunday as the Tigers host the defending SEC Western Division champion Auburn Tigers at 2 p.m. at the LSU Soccer Complex.