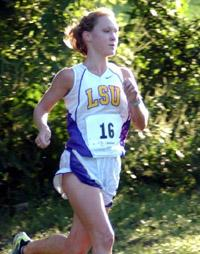 BATON ROUGE — After a three-week hiatus the LSU cross country team returns to action Sat., Oct. 19 at the Chile Pepper Invitational in Fayetteville, Ark. The Arkansas-hosted meet will take place at the Agri Park Cross Country Course with the men’s 10K race beginning at 9:30 a.m. and the women’s 6K race following at 10 a.m.

LSU will face its stiffest competition of the season as No. 2 Arkansas and No. 25 Oklahoma State headline the men’s 17-team field. The Lady Tigers will be challenged by 10th-ranked Arkansas, 27th-ranked Southwest Missouri State and 23 additional colleges and universities that will comprise the women’s field.

The Tigers are coming off a successful last outing, at their own LSU Invitational, as the men’s team scored just 48 points to take home the team title and the women narrowly missed a win of their own, placing second overall with 64 team points. The men’s win marked their second in three meets, while the Lady Tigers’ 64 points were their second lowest total of the season.

Individually, LSU will look to sophomore Tomario Thomas on the men’s side and senior Marian Burnett on the women’s side to pace the Tiger teams.

Following the Chile Pepper Invitational, LSU will take the next two weeks off to prepare for the SEC Championships that are set for Mon., Nov. 4 at the University of Florida.