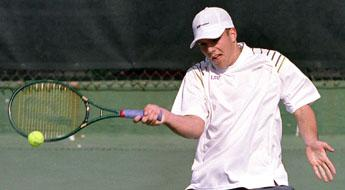 NEW ORLEANS — Seven members of the LSU men’s tennis team will begin competition at the 2002 Tulane Invitational on Friday at the Goldring Tennis Stadium on the campus of Tulane University in New Orleans, La.

“This is another tournament that our guys can use as an opportunity for improvement,” said LSU head coach Jeff Brown. “It is also a chance for our more experienced guys to step up their level of play and begin to take on a leadership role. We don’t have any seniors on the roster, so that means that our juniors and sophomores will have to lead this team.”

LSU will be led in the three-day competition by juniors Bryan Fisher and Sebastian Rutka, sophomores Jason Hazley and Peter Richman, as well as freshmen Frank Green, Rafael Corazza and Paul White. Fisher is currently the 68th-ranked singles player in the nation and owns a 1-2 overall record on the season.

The 2002 Tulane Invitational will feature an assortment of the nation’s top tennis programs including Louisiana-Lafayette, LSU, Middle Tennessee State, UNO, San Diego State, Southern Miss and Tulane. The tournament is comprised of three flights for both singles and doubles play with the top flight in singles and doubles being a round-robin event featuring players competing for national rankings.

“Our older players are all used to playing in these fall tournaments,” Brown said. “But it’s going to take our younger guys a while to get used to it. At this point in the season, we just need to make sure that everyone works hard in practice and pushes each other to be the best that they can possibly be. If we do that, then we will succeed in both the fall and the dual-match seasons.”

Play will begin with the first round of singles competition on Friday at 9 a.m. at the Goldring Tennis Center on the campus of Tulane University in New Orleans.