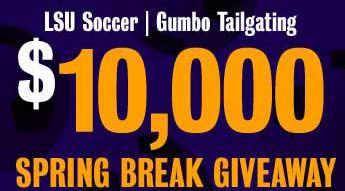 BATON ROUGE — The LSU soccer team will attempt to win its sixth-consecutive contest at the LSU Soccer Complex on Friday as the Tigers face off against the Alabama Crimson Tide in a Southeastern Conference Western Division battle at 7 p.m.

“These are both big games for us this weekend,” said LSU head coach George Fotopoulos. “Both Alabama and Auburn are very good teams and they have a lot of talent on their respective rosters. Alabama is always a tough team to play and Auburn has really become one of the conference’s top programs in the past few years. We’re definitely going to have to play our best soccer this weekend.”

LSU heads into Friday’s SEC matchup with an overall record of 10-2-1 on the season and a 2-1-1 mark in conference play. Last weekend, the Tigers earned a 1-1 tie versus the defending SEC champion Florida Gators before falling on the road to South Carolina, 2-0. LSU’s loss against the Lady Gamecocks marked the Tigers’ first defeat in 11 contests since Sept. 6.

The Tigers own a perfect 5-0 record at home this season and have outscored the competition 36-0 at the LSU Soccer Complex.

Alabama comes to Baton Rouge with a 10-3-1 overall record and a 1-2-1 mark against SEC opponents. The Crimson Tide lost to Ole Miss, 2-1, on Friday and forced a 1-1 draw with Mississippi State on Sunday. The Crimson Tide opened conference play with a decisive 4-1 victory over Georgia on the road.

“Despite losing to South Carolina last week, I think that our team gained a lot of confidence with how we played against a tough team like Florida,” Fotopoulos said. “We played our best game of the season versus Florida and I believe that we’re going to need to play that like this weekend against Alabama and Auburn.”

In the all-time series between the two SEC Western Division rivals, Alabama owns a 5-1-1 overall lead versus LSU. Alabama opened the seven-game series by winning the first five matchups between the schools by an overall score of 16-2. The Tigers’ first victory against Alabama came in Coach Fotopoulos’ first year at the helm of the LSU soccer program in 2000, 2-1.

Last season, LSU and Alabama fought to a 0-0 double-overtime draw at the Alabama Soccer Complex in Tuscaloosa, Ala.

Friday’s Western Division contest versus the Alabama Crimson Tide will begin at 7 p.m. and is being promoted as the LSU Gumbo Greek Tailgate Extravaganza. The LSU student media will sponsor a tailgate with a gumbo cook-off and giveaways beginning at 6:15 p.m.