'Fan Jam' Set For Friday Night in the PMAC 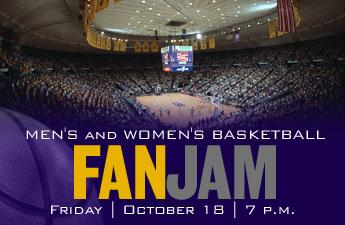 The two-hour event inside the Assembly Center is free to the public and activities will begin outside the building at 6 p.m. with a live band performing in front of the building.

Also featured during the event will be the Tiger Cheerleaders, the Tiger Girls and the new still-to-be named women’s dance team. Coach John Brady and Sue Gunter will introduce the men and women’s teams and each coach will put their respective teams through their paces for approximately 20 minutes. The evening will conclude with an autograph session featuring the players of both teams.

Those fans interested in purchasing season tickets for men or women’s basketball will also have that opportunity to see where the seats are they can purchase as members of the LSU Athletic Ticket Office will be on hand to assist patrons.

Also one lucky LSU student will have the opportunity to make a basket for free tuition among the special games and prizes to be offered to the crowd at the event.