Mauck Out 'Indefinitely' With Foot Injury 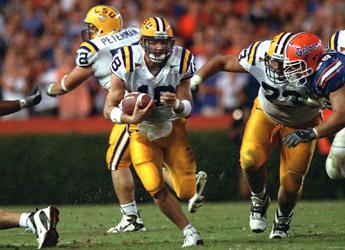 BATON ROUGE — LSU starting quarterback Matt Mauck will be out of action an indefinite period of time after suffering a mid-foot injury in Saturday’s 36-7 win over Florida in Gainesville, LSU coach Nick Saban announced on Wednesday.

Mauck, a sophomore from Jasper, Ind., was re-evaluated by LSU team doctor Brent Bankston on Tuesday night. According to Bankston, “The evaluation on Tuesday showed he has a significant injury to the mid-foot. At this time, he will be out indefinitely and will undergo further testing to determine if surgery is necessary.”

Mauck was injured when a Florida defender rolled over his right foot after a tackle.

Through six games, Mauck has completed 63 of 130 passes for 782 yards, nine touchdowns and only two interceptions. He’s rushed for 175 yards and two TDs. Mauck connected on 13 of 20 passes for 153 yards and two scores in Saturday’s win over Florida. Mauck hasn’t thrown an interception since the second game of the season, a streak that spans 88 consecutive passes.

In Mauck’s absence, sophomore Marcus Randall will takeover as LSU’s starting quarterback. Randall has appeared in four games this year for the Tigers and he’s completed 4 of 8 passes for 33 yards and he’s rushed for 13 yards on five carries.

LSU returns to action on Saturday when they host South Carolina at 6:45 p.m. in Tiger Stadium in a game televised by ESPN2.