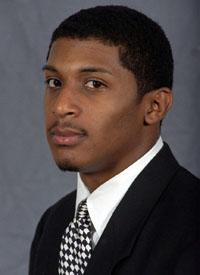 BATON ROUGE — LSU defensive back Corey Webster has been named the Southeastern Conference Defensive Player of the Week for his performance in the Tigers’ 36-7 win over Florida in Gainesville on Saturday, the league office announced on Monday.

The honor is the first of Webster’s career and marks the second time this year an LSU player has been recognized as the league’s player of the week. Earlier this season placekicker John Corbello was named SEC Special Teams Player of the Week for his performance against Miami (Ohio).

Against Florida, Webster tied a school-record with three interceptions, one of which he returned 45 yards for a touchdown in the first quarter giving the Tigers a 10-0 lead. Webster’s first interception setup an LSU field goal.

Webster’s third interception came in the fourth quarter and it prevented Florida from reaching 250 yards of total offense in the contest. That interception in the fourth quarter kept LSU’s streak of holding opponents to under 250 yards of offense to six straight games, a streak that is the longest of its kind at LSU since 1964. Florida finished the game with 237 yards of offense, including only 163 passing yards.

Webster’s three interceptions mark the first time a Tiger defender has picked off three passes in a game since Chris Williams did it against Rice in 1978. It’s the first time it’s been done by a Tiger in an SEC game since Craig Burns had three against Ole Miss in 1970.

For the year, Webster leads the SEC and ranks third in the nation with five interceptions.

Arkansas’ Fred Talley earned SEC Offensive Player of the Week honors after rushing for 241 yards and one TD in the Razorback’s 38-17 win over Auburn, while Georgia’s Billy Bennett earned the league’s special teams honor after kicking three field goals in a 18-13 win over Tennessee.