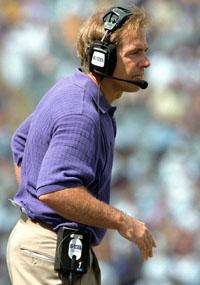 BATON ROUGE — Coming off a 36-7 victory over No. 16-ranked Florida, LSU head coach Nick Saban addressed the media before the Tigers’ 6:45 p.m. CDT contest with South Carolina on Oct. 19. The South Carolina game will be televised by ESPN2.

CBS will exercise a six-day selection for games televised on Oct. 26.  The games being held are LSU at Auburn, Alabama at Tennessee and Georgia at Kentucky.

ESPN will make its selection from the games remaining after CBS selects its game and Jefferson-Pilot will televise the remaining game.

The selections could be made as early as Saturday but no later than Sunday morning.

“This was a good win for us and I am very proud of our players for how they played in the game and how they competed in the game. I thought they showed a real ability to make plays in the game when we needed to make them. We made some big plays on defense early in the game and the offense did a really good job of controlling the football in the second half and putting together a great 80-yard drive, which was probably the biggest, most significant drive of the year. That was really the momentum-changer in that game and was the difference.”

“We have a totally new challenge this week in terms of who we play, a very good team in South Carolina. I think what everybody needs to understand — the media, fans, players, coaches and everybody that is associated with the game — is that you can’t be selective about when you compete in this league or when you want to play hard and when you need to play well because every game you play is a real challenge and an important one. This is the biggest game of the year for us because it is the one we are having now. South Carolina is an excellent football team. They are only giving up about 12 points a game (in SEC games) and they move the ball effectively on offense.”

“They run the ball very well and they show balance and make big plays off of some of their running attack. Their quarterbacks both can run the ball effectively and they have a couple of good running backs and some receivers that make some big plays. They are pretty sound and solid on special teams. They are going to play the game the way it is supposed to be played and if you are going to beat them you have to beat them because they do not beat themselves that much and that is the challenge that we have.”

“As far as our injuries right now, I would say that (quarterback) Matt Mauck (foot) is questionable for this game. He has a lot of swelling in his foot but x-rays were negative but because of all the swelling we put him in a cast. Dr. (Brent) Bankston is going to re-evaluate him either Tuesday night or Wednesday to see if he can weight bear and if he can’t by then he will obviously be out for the game. Two guys out of practice today will be Kenderick Allen, with an ankle and Demetri Robinson with an ankle. We have a couple of other guys that will be in red shirts but we do not feel like anyone else will be a problem for the game.”

“I do not know if I have a policy on guys playing if they have been injured and I do not think I have ever stated one or said a guy has to practice a certain number of days to be able to play in the game. I would say if a guy can’t practice in Thursday’s practice he would have a difficult time being able to play in the game. We have had guys that have not practiced in those situations and in some role in the game played and made a contribution, yes. Most of the time that is kind of where you draw the line I think.”

“The injury report here reads like a team roster. People that are out, that means they’re dressed in yellow: (defensive end, No. 90) Jason Capers, (safety, No. 11) Rashad Faison, (defensive lineman, No. 95) Randy Jackson and (defensive lineman, No. 96) Shaun Smith. Those are all guys who played last Friday. Smith’s got a knee, it’s a new one. We’re just going to have to see where we go from there on the injuries.

“Last week, I was really proud of our team the way they kept their poise, the way they competed, the way they came back, the way we executed in the second half. Kentucky had had an open date and was well prepared, did some things that we had not anticipated, threw the ball down field a lot more than they had previously. But, we felt that there were big keys: (1) we could not give up the big play, and we did a pretty good job on that. That’s the first week we did a good job of not giving up the big play. They had one pass, I think 28 yards was their biggest play.

“The other thing that we felt we had to do well was we had to play well on the goal line. As you know from last week, they had scored 19 out of 20 times inside the 20. Against us, they scored one out of three. We created one fumble and held them to four down from the 7-yard line.

“On offense, one thing we thought we had to do was score every time we got inside the 20. We were inside there three times and came away with three scores. We were 3-for-3 in the red zone, they were 1-for-3, but going into the game all indications were that it would be just the opposite. So that was critical.

“It was a win. Now you go on, and you look at the injury situation and go to LSU. Let me tell you a little bit about LSU. These are facts: They’re defending SEC Champions, we know that and they won the Sugar Bowl last year. But, they’re No. 1 in total defense in the entire country, No. 2 in scoring defense. They’re giving up 207 yards per game. They’re giving up 10.5 points per game. They’re No. 3 in pass defense, giving up 123.5. They’re No. 7 in rush defense. So, it’s obvious you attack their weakness, which is rushing defense. They’re only seventh in the country in that statistic, allowing 2.6 yards per rush and 3.2 per offensive play, giving up seven touchdowns this year. They’ve got a great defensive secondary led by Corey Webster who’s third in the nation with five interceptions. If he were on our team, he’s be very close to being our leading receiver Then there’s their safety, Damien James…. Linebacker Bradie James is a Butkus Award candidate. He’s awfully, awfully good. But, their linebackers weight about 250 pounds. The defensive line — the one end is like 6-7, 294. They’re big and they’re strong. Chad Lavalais, you look at him — and I mean this sincerely — LSU’s had a top-five recruiting class the last three years in a row. They’re as well coached and as fundamentally sound as any defense you’ll see. They are intimidating.

“Offensively, they are third in the SEC and 20th in the nation in rushing at 215 yards per game. Even though they lost Toefield, they’re still got Domanick Davis who is outstanding. Go to the kicking game — and I don’t want to even look at these stats any more — they’re leading the nation in punt returns, averaging almost 20 yards per punt return. That may not impress you, but they’re had two punt returns called back because of penalties on punt returns. The kickoff return is one of the tops in the nation. Their kickoff coverage I think is first in the SEC. They’re got an excellent quarterback in Matt Mauck. He’s only thrown two interceptions. He’s big, he’s strong, he’s physical, and I was really impressed last year when he had to come in and play in the championship game in Atlanta. He just played outstanding. He’s a lot like (South Carolina quarterback) Corey Jenkins in that he’s tough, he runs hard, he throws exceptionally well. They have great receivers, Michael Clayton and a guy named Devery Henderson. You look at their offensive line, look at their running back, look at their receivers, look at the quarterback, look at the kick game, look at defense …. The question I ask is ‘Why are they only 12th in the country?’ They’re just an intimidating football team, and I had no idea until I looked at them on film. It’s their athleticism, their fundamentals and their size that really impress me.”

On LSU’s secondary…
“One thing they don’t do is give up the deep pass. They’re very selfish, but they don’t gamble with their secondary. They had good cushion, they know what they’re doing, they mix up their coverages, and they play it well and they get a lot of pressure. They have 23 sacks. That’s more than K-Mart has.”

On attacking LSU’s defense…
“You can’t attack LSU very much at anything. We’re just going to have to try to find a way to have some success. But, yet when you’re in the middle of the year, you can’t change you offense, etc. We’re just going to have to see what we can do, see how we match up and how they play us. Nobody else has been able to attack them. Nobody has. The only ballgame they got beat by Virginia Tech up there, but you can never evaluate a team by their opening game. It’s different. But, Florida or anyone else hasn’t been able to move the ball on them on a consistent basis. If Florida couldn’t attack them, I don’t know how we can. I don’t know the answer right now. But I’m sitting here, and I’m usually negative on Monday.”

On playing in Tiger Stadium at night…
“Every time we go on the road, we go at night. I wouldn’t know what to do if we got home before 2 in the morning. It’s hard. The crowd gets excited. And I know that at Arkansas, at LSU, at Tennessee…. I mean, the only people we ever play during the day away from home in the conference is Florida. Everybody else we play at night. This is a hard environment. I took a Notre Dame football team down there my first year. And all I remember is ‘Tiger Bait, Tiger Bait.’ For a state that has so many Catholics, they were really anti-Catholic. To hear those people, I thought, ‘Man, the French.’ Louis XIV sent the Catholics over there to settle New Orleans, etc. But, boy, they were hostile and they were loud and they were vocal. LSU had a good team. They were fifth in the country that time. They had that Davis (actually Henry Thomas), I want to say, a middle guard. This was 1986. Played in the pros for many years. Just a hard place to play. We couldn’t hear. And they played awfully, awfully well, LSU did. A very hard play. This is a better LSU team this year than is was then.”