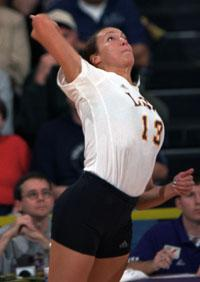 AUBURN, Ala. — The LSU volleyball team ended its trip through Alabama with a hard-fought three-game win at Auburn on Sunday afternoon in the Student Activity Center, 30-23, 30-26, 30-28.

With the win, LSU improves to 10-6 overall and 2-3 in Southeastern Conference action. Auburn remains winless in SEC play, falling to 1-17 overall and 0-6 in league action.

Leading the way for LSU were Kyra Lancon and Rachel Vogt with 11 kills each.

Vogt also had 10 digs for her first double-double of the season. Jenny Greco was the only other LSU player in double-figures with 10 digs.

Cara Causey added eight kills for the purple and gold, while Regan Hood was the leading blocker for LSU with four blocks.

“It was really nice to have get playing time for a bunch of players today after our starters struggled early,” said LSU head coach Fran Flory. “We were able to get some depth at several positions that I think we may need later on in the season. Overall I thought Kyra Lancon and Jenny Greco had really nice games for us today.”

LSU struggled to find the court early in the first game, falling behind 12-5 while committing four attacking errors. After a timeout, Lancon sparked a comeback with two kills and an ace as LSU crept to within one, 14-13.

LSU took its first lead of the match 17-16 on a block by Lancon and Regan Hood. After the game was tied three more times, LSU took the lead for good, 21-20 on a block by Hood and Jennifer Hampton, part of a 10-3 run that closed out the game for LSU.

With the second game tied at four, Auburn went on a 6-2 run to open up a four-point lead, using three of its nine blocks in the game. Slowly, LSU came back before tying the game at 15 on a ball handling error by Auburn.

After the game was tied five more times, Auburn jumped out to a three-point lead, 23-20. Causey keyed the LSU comeback with four kills a block and an ace on game point as LSU took the game, 30-26.

Auburn once again jumped out to an early lead in game three, 11-7. LSU used a pair of kills and a block by Rachel Vogt as part of a 4-0 run to tie the game at 11. The match was tied three more times before LSU took the lead for good at 15-14 on a kill by Hood.

LSU led by as many as four points, 19-15, but AU would not go away quietly in the decisive game. Auburn slowly cut into the LSU lead. With game point on the line, AU scored three straight points to get within one point before a kill by Vogt gave LSU the game and the match, 30-28.

LSU remains on the road next weekend, traveling to face No. 3 Florida in Gainesville at 8 p.m. ET on Friday before taking on Georgia in Athens on Sunday at 3 p.m. ET.