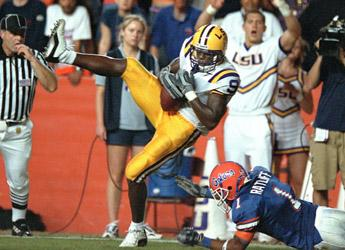 GAINESVILLE, Fla. — In the biggest Gainesville blowout by an LSU football team since the early days of late Tiger coach Charlie McClendon, the LSU football team dominated Florida in every aspect of the game during the second half and ran away with a 36-7 victory in front of 85,252 in “The Swamp.”

The Tigers (5-1, 2-0 SEC) took an early 13-0 lead before Florida (4-3, 2-2) cut it to 13-7 at the half. In the second half, the Tigers put up 254 yards of total offense while holding Florida to only 91, outscoring the Gators, 23-0. The 237 yards of total offense by the Gators marked the sixth-straight time LSU’s No. 1-ranked defense held its opponent under 250 yards this season. LSU’s allowing only 207 yards per game and should continue to lead the nation when NCAA statistics are released on Sunday.

Junior cornerback Corey Webster — who played wide receiver during his first season in Baton Rouge — tied a school record with three interceptions, including one returned 45 yards for a touchdown. His three pickoffs were the first by a Tiger since Chris Williams had three against Rice in 1978 and the first in a road SEC game since Kenny Konz in 1949 against then-SEC member Tulane.

LSU racked up 249 rushing yards, led by Domanick Davis with 14 carries for 84 yards, Matt Mauck with 15 carries for a career-high 67 yards and Joseph Addai with 56 yards on 16 carries. Florida only managed 74 yards on 25 carries, 3.0 yards per rush. Davis finished the game with 163 all-purpose yards.

In the air, LSU quarterback Matt Mauck completed 13-of-20 passes for 153 yards and two touchdowns, both to Devery Henderson for 13 and 25 yards on consecutive third-quarter passes. Henderson led LSU with a career-best four receptions and finished with 49 yards receiving. Michael Clayton had 83 yards on three receptions.

Placekicker John Corbello was 3-for-3 on the evening, making field goal attempts of 37, 45 and 20 yards. A 52-yard attempt was faked, and holder Blain Bech ran 35 yards for a touchdown.

After losing the toss, the Tigers opened the game with a three-and-out drive that started from their 14 and were forced to punt. A 46-yard punt by Donnie Jones was returned 19 yards to the LSU 48, where the Gators advanced to the 24 before being stopped on 3rd-and-5.

The Gators faked a 42-yard field goal attempt, as holder and punter Jeff Whitaker took the snap and rolled to the right in search of running back Ran Carthon. Carthon ran wide open at the LSU 10, but Whitaker’s throw sailed over his head and into the back of the end zone.

On his first pick off, Webster stepped in front of Florida wide receiver Taylor Jacobs and intercepted Grossman at the LSU 49. A 22-yard pass from Mauck to Michael Clayton took the Tigers to the Florida 21, however, the drive then stalled and LSU was forced to settle for a 37-yard field goal attempt by John Corbello. The attempt was successful and the Tigers led 3-0 with 4:54 to play in the first quarter.

One minute and 16 seconds later, Webster and the LSU defense read Grossman’s audible perfectly. The LSU cornerback showed man coverage before dropping into a zone against Grossman. Instead of cutting to the sideline for Grossman’s pass, Jacobs continued down the field, leaving Webster unabated to the ball. He returned the interception, his fourth of the season, 45 yards for a touchdown and a 10-0 lead with 3:38 to play in the quarter.

After the defense stopped the Gators without a first down, the Tigers took over at its own 46. On second down, Mauck faked a handoff to Davis and took the ball up the right side for a 27 yard gain to the Florida 25. Again, the drive stalled just outside the red zone and the Tigers took a Corbello 45-yard field goal to a 13-0 lead as the first quarter came to an end.

A personal-foul face mask penalty at the LSU 41-yard line by Demetrius Hookfin on Jacobs gave the Gators a scoring opportunity. On 3rd-and-7 from the 16, Grossman threw a dart to Jacobs crossing the middle of the end zone for a touchdown.

LSU led 13-7 at the half, as neither team threaten the others’ territory over the final eight minutes of the half until Clayton caught a 4th-and-2 pass from Mauck and took it 39 yards to the Florida 17 as the half came to an end.

The Tigers stopped the Gators just short of Tigers territory to start the half, forcing a punt that rolled just into the corner of the endzone for a touchback.

Mauck and Davis then led the Tigers to a 12-play, 80-yard drive that lasted 6:12, the longest touchdown drive of the season in terms of time of possession. On the drive, Davis and Mauck combined to rush eight times for 37 yards before Mauck hooked up with Henderson in the flat. With three men to beat, Henderson cut inside and dived into the endzone for a 13-yard touchdown reception and a 20-7 lead.

Another defensive stop by the Tigers coupled with a 31-yard punt return by Davis gave LSU excellent field position at the Florida 25. On the first play of the drive, Henderson came back to an under-thrown pass in the endzone to catch his second touchdown pass in as many throws.

LSU increased the lead to 26-7 after failing on the two-point conversion failed with 4:10 left in the third quarter.

On the ensuing LSU possession, the Tigers looked to be headed for another Corbello field goal as Joseph Addai ran LSU to the Florida 35 before being stopped. On the 52-yard attempt, holder Blain Bech took the deep snap and ran 35 yards around the right side for a touchdown, his first collegiate statistic.

The Tigers led 33-7 after the point after was successful.

Just after the start of the fourth quarter, defensive end Marcus Spears jumped to spear a one-handed interception from Grossman and returned 18 yards to the Gators’ 9.

LSU ran the ball three times to the 3-yard line before Corbello tacked on a 20-yard field goal for a 36-7 lead with 12 minutes to play.

The Tigers had yet another opportunity inside the Gators’ 10, but elected to go for a 4th-and-goal at the two and turned the ball over on downs.

LSU returns to action on Oct. 19 when it plays host to South Carolina at 6:45 p.m. on ESPN2 in Tiger Stadium