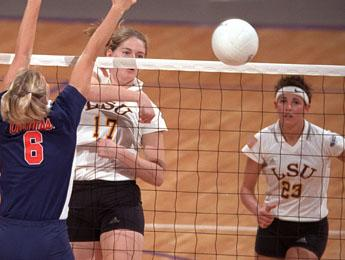 BATON ROUGE — The LSU volleyball team kicks off a four-match Southeastern Conference road trip in Tuscaloosa, Ala., on Friday against Alabama at 7 p.m. in The CAVE.

Having won the first game in all 14 matches this season, the Tigers enter the match at 9-5 overall and 1-2 in SEC play. Alabama (12-6, 3-1 SEC) tied with LSU for second place in the SEC Western Division last season and was picked to finish just ahead of the Tigers in the preseason polls in 2002.

“This is a big road match for us,” said LSU head coach Fran Flory. “Alabama is one of the only teams in our league to return most of their key players from last season, a team that finished second in the SEC West. We need to play our type of game at our pace and start this road trip with a win.”

Last week, LSU swept UNO, 3-0. The match was part of the Louisiana Showcase doubleheader in the New Orleans Arena, site of the NCAA Women’s Volleyball Final Four in December.

After Hurricane Lili forced the postponement of the Kentucky match last Friday, the Tigers dropped a four-game match to South Carolina at home. LSU became just the second team all season to hold the Gamecocks to under 22 points in a game, defeating USC 30-21 in game one.

For the year, the Tigers are led by senior Jennifer Hampton, who averages 4.20 kills per game and 3.11 digs per game. Senior Katie Kubena is the team’s leader in assists with 11.45 per game and service aces with 24.

Sophomore Regan Hood leads the team in blocks with 40, while freshman Cara Causey leads the team with 1.11 blocks per game. Senior Lauren Cuyler is the team leader with 10 solo blocks.

The teams have now played 32 times, with LSU holding the 18-14 series advantage. After dropping five of the first six matches, the Tigers won eight straight meetings, the longest winning streak by either team in the series. LSU has also won three of the last four meetings.

In Tuscaloosa, the series is tied at eight wins each. Last season, the Tigers won two regular season meetings, one each in Baton Rouge and Tuscaloosa, before losing in the first round of the SEC Tournament.