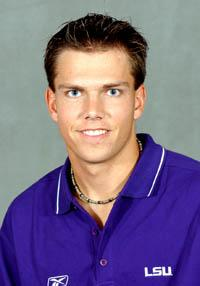 CHATTANOOGA, Tenn. — LSU’s 68th-ranked Bryan Fisher and the Tigers’ doubles team comprised of Cory Ross and Sebastian Rutka were each defeated in the qualifying round of the 2002 Icy Hot/ITA All-American tournament here in Chattanooga, Tenn. on Tuesday.

Fisher, LSU’s rangy junior from Nashville, Tenn., entered Tuesday’s competition with a 1-1 overall record on the season and came in as the 10th-seeded player in the qualification tournament.

In Tuesday’s opening round of play, Fisher fell to California’s Robert Kowalczyk, 6-3, 6-4. With the win, Kowalczyk advanced to face Georgia’s Nic Boeker in second-round action. The loss dropped Fisher to a 1-2 mark in fall tournament play.

LSU’s tandem of Ross and Rutka lost to Southern California’s combination of Johan Berg and Daniel Langre in the opening round of doubles qualification. With the close 9-7 loss, the Tigers’ duo fell to an overall record of 2-1 in the fall.

The LSU men’s tennis team will next be in action on Friday, Oct. 18, as the Tigers compete at the 2002 Tulane Invitational in New Orleans.