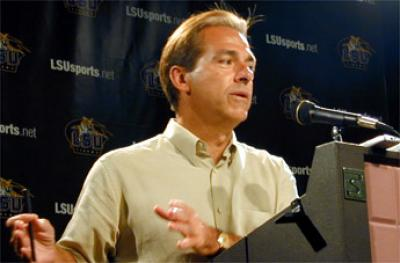 BATON ROUGE — Before his team’s matchup with No. 16 Florida, LSU head coach Nick Saban addressed the media during his weekly press luncheon from the fifth floor of the LSU Athletics Administration Building. Also, ESPN2 announced that the LSU versus South Carolina game on Oct. 19 will be aired on the network at 6:45 p.m. CT.

“In viewing the last game I thought it was a good game. It was our goal going into the game that we would improve in several facets of our game and get off to a good start in the game and I think we did that. We played hard and we were basically pretty pleased with that. Obviously it was a tough loss for us to lose LaBrandon Toefield and obviously our attention is to support him academically and as well as in his rehab to try to get back sometime in the season. It is a bit of a long shot that he would make it back but he could make it back by the end of the year and most certainly by a bowl game if we are fortunate to be involved in one.”

“This is an opportunity for some other guys to step up. Domanick Davis has been a pretty consistent player for us and is having an outstanding year so far this year. He is going to have to carry a lot more of the load and Joseph Addai is going to have to go back to tailback. That is probably his natural position anyway. We were just trying to get him some playing time by playing him at fullback because of the runners that we had. I think we will probably use Shyrone Carey as a spot player at that position to add depth at that position with Ryan Gilbert. Solomon Lee should be okay and be back, which is helpful to us at fullback. Travis Daniels (hamstring) is not 100 % but we think he may be available for this game. The only guy that will probably be out of practice today will be Stephen Peterman who has a sore ankle.”

“I am pleased with where we are as a team attitude-wise. We have some big challenges ahead and it certainly starts this week with one we have against Florida. I think Florida has an excellent football team and they probably have as good a players as anybody. They had some problems this year with special teams and have had some turnovers at times but their quarterback is probably as good as there is in the country. I think Graham (Ernest) is an excellent running back and Taylor Jacobs is a great receiver and Perez (Carlos) has been very productive for them as well, so they have lots of weapons on offense. On defense they are probably as hard to score on as anyone whether the numbers say it or not. They have also had to deal with the field position relative to some special teams problems and also turnovers. I think the difference in the game at Ole Miss this past week was their four turnovers and one was run back for a touchdown and that was basically the difference in the game.”

“Ron Zook is a good coach and has done a good job with this team and he has a tough job on his hands when a guy like Steve Spurrier leaves, a guy that has been there a long time. The transition is a little bit difficult. This team is very capable and is an excellent team and is as good a team that we have played since we played them last year. I think the key for us is to do what we do, to play our game and be physical and aggressive. That is going to give us the best opportunity to be successful.”

“They (Florida) are totally different scheme-wise this year on defense. John Thompson is doing a lot of the same things he has always done in terms of multiple fronts, lots of blitzes, so they are more similar to Arkansas last year than they are to Florida and Florida had the best defense in the league last year. They have pretty good players and I think they are playing really well on defense.”

On having the nation’s No. 1 rated defense….

“First of all I am not big on stats so where we are ranked on defense really doesn’t matter. I am not displeased in any way, shape or form with the progress of our defense. I think we have good leadership, we have a nice blend of experience and young guys and the young guys have really made a tremendous amount of improvement over the last 3-4 games. Most of the older guys are playing well and are playing the way you would like your experienced players to play. They are not making many mistakes, they are supporting the younger guys, they are playing hard and setting a good example for them. Sometimes statistics get skewed based on who you play, how productive they are, but I cannot ask for any more from what our players have done this year relative to how they have played on defense, but it really doesn’t mean anything. We are going to play a really good team this week and we will find out a lot about just how good we are, can we go play well on the road, those types of things. You really are as good as your last play and so the challenge this week is to go play a really good Florida team that has a great offense and that is the challenge for our defense. Basically what we have done in the last three or four weeks will not help us any in this game.”

On the play of the defense….

“Well, the defense has improved. We are not giving up as many big plays and we are playing better in the back and that is probably why we are not giving up as many big plays. We have been able to still stop the run by maybe not committing as many people to stopping the run all the time and I think we have been a little more aggressive in what we do which is what we have always wanted to do. We have executed better and made fewer mental mistakes, which is probably contributed to experience in the system. That has never changed, even though we have had three different coordinators. I think the fact that we have a coordinator that has been in the system and has been promoted in the system in also helpful because it has changed even less. We also do not have to sell anyone on what we are doing and that carries on to the players and everyone else.”