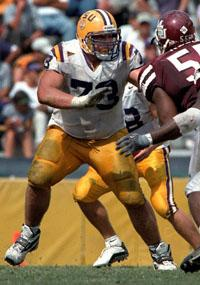 BATON ROUGE — The LSU coaching staff singled out six players — two each on offense, defense and special teams — as the player’s of the week following the Tigers 48-0 romp over Louisiana-Lafayette on Saturday.

Sale graded out at 90 percent at the Tiger offensive line pave the way for another 200-plus yard rushing game for LSU. LSU finished with 205 yards rushing on 47 carries, the Tigers’ fourth consecutive 200-yard rushing game.

As a unit, the Tigers held the Cajuns to only 70 yards of total offense, including just 17 yards on the ground. The Cajuns were also 0-for-16 on third down conversions.