Gamecocks Come Back to Beat Tigers, 3-1 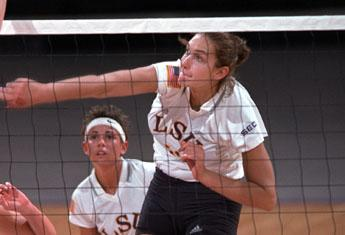 BATON ROUGE — After dominating the first game in front of a raucous home crowd, the LSU volleyball team could not hold off South Carolina, dropping the four-game match, 21-30, 30-26, 30-20, 30-19, on Sunday afternoon in the Pete Maravich Assembly Center.

The Tigers (9-5, 1-2 SEC) became just the second team to take a game from South Carolina in Southeastern Conference play. The Gamecocks (12-3, 5-0 SEC), undefeated in SEC action, were 12-1 in league games this season entering the match. Their only previous loss was a single game to Arkansas on Friday.

“South Carolina beat us at the net today,” said LSU head coach Fran Flory. “In the first game they had only one block and we dominated that game. In the third and fourth games, they had a total of 11 blocks and our offense struggled to find a rhythm.”

Lauren Cuyler had 11 kills for LSU and led the team with four blocks, including two solo blocks. Kyra Lancon rounded out the quartet with 10 kills. Jenny Greco was the only Tiger in double figures with 10 digs.

In the first game, LSU came out to hit at a .441 clip, recorded 18 kills and only three attacking errors. The Tigers also had two blocks and recorded three service aces, en route to a dominating 30-21 win.

The second game was sloppy on both sides. Neither team hit over .100 as the pair combined for 22 errors and just 27 kills. The game was tied at 23 before South Carolina used poor passing by LSU to take advantage and jump out to a four-point lead. LSU cut the Gamecock lead to two, 28-26 but a kill by Megan Hosp and a block by Nieve Curry and Sam Alban gave South Carolina game two, 30-26.

“Losing game two was a turning point in the match,” said Flory. “We had a chance to go up two games on them but had some break downs in our passing and they were able to capitalize. Instead of heading into the bread with the solid lead, the match was tied at one game each.”

In the third and fourth games, the Gamecocks hit over .400 and overpowered the Tigers. An 8-0 run midway through the fourth game broke a 12-12 tie and that momentum carried South Carolina through to the 30-20 win.

In the fifth game, the Game cocks opened up a five-point lead early and never backed down, leading by as many as 13 at one point before sealing the match, 30-19.

LSU now starts a four-game road trip beginning with a swing through the state of Alabama. The Tigers will face Alabama next Friday at 7 p.m. before traveling to Auburn on Sunday at 2 p.m.