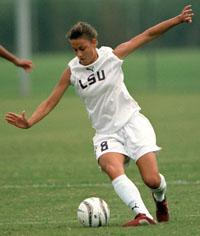 STARKVILLE, Miss. — The LSU soccer team earned its ninth-consecutive victory and remained undefeated in Southeastern Conference play on Sunday, as the Tigers defeated the Mississippi State Bulldogs, 3-1, here at the MSU Soccer Field in Starkville, Miss.

“I’m so proud of these girls,” said LSU head coach George Fotopoulos. “It was a total team effort and the game ball went out to one of our freshman, Kristin Frischhertz. She hasn’t played that much all season, but today she had a major impact and stepped up for us with some crucial minutes with all of our injuries.”

Mandy Heintz, the nation’s leading scorer heading into Sunday’s contest, earned the game-winning goal at the 79:11 mark as she headed a deflected free kick past the keeper. The deciding score developed as LSU’s Ashley Mitnick rifled a 30-yard shot that caromed off of the cross bar. Heintz collected the rebound and recorded her second-straight game-winning goal and her eighth game-winner the 2002 campaign.

With her second goal against the Bulldogs, Heintz became the first person in LSU history to score 20 goals in a season since 1996 when former Tiger great

Jackie Cooper accumulated 26-total goals. Heintz has scored a goal in each of LSU’s previous nine games and leads the SEC in both points (42) and goals (20).

“Mandy Heintz had another outstanding game for us,” Fotopoulos said. “I’m going to push for her to be the SEC Player of the Week again. I mean she had the game-winning goal against Ole Miss and then she did it again today. She’s getting it done for us offensively and she’s making history, but like I said, I’m most proud of the team’s effort.”

LSU’s Heintz gave the Tigers’ a 1-0 lead at the 71:46 mark in the contest as the junior from San Antonio, Texas, headed a crossing pass from Kasey Dexter into the left-hand corner of the net. On the play, Heintz earned her first of two goals on the afternoon and Dexter notched her first assist of the season.

Shortly after the Tigers’ first goal, Mississippi State rebounded with an equalizing score from Betty Ann Casey at 78:22. The Bulldogs’ highly touted freshman from Coral Springs, Fla., recorded her fourth goal of the season as she collected a pass from Meghan Odom and scored into the top-right corner of the net.

LSU’s Artie Brown added the Tigers’ third goal with 2:35 remaining in Sunday’s game. The Tigers’ quick sophomore from Baton Rouge took a pass from Stephanie Keating and darted to the right side of the field where she placed a shot past the keeper into the right-hand corner of the net. The goal was Brown’s third of the season and the 11th of her career.

In the first half of play, the Western Division rivals competed to a 0-0 tie. Each team played relentless defense and LSU held the Bulldogs without a shot despite allowing six corner kicks. The Tigers recorded five shots in the first half and forced Mississippi State’s Krystal Werges to make three saves.

Mississippi State opened Sunday’s game with a lot of momentum and maintained possession for a majority of the first half. With 20 minutes left in the opening half of play, LSU’s physical style of defense began to open some counter-attacking holes for the Tiger offense as Keating, Elizabeth Marschall and Brown earned shots on goal.

The LSU soccer team will next be in action on Friday, Oct. 11, as the Tigers head to Gainesville, Fla., to challenge the defending SEC Champion Florida Gators at 6 p.m. at the Percy Beard Soccer Stadium.