Addai Steps in For Injured Toefield 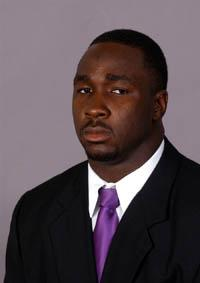 If you’re looking for a glamour position on the football field, fullback is definitely not the place to find it.

Fullbacks get to work out with the rest of the running back corps, but most of the job duties entail blocking and much of the “dirty work” that goes unnoticed in the box score but is no doubt vital to the success of an offense.

Knowing that the fullback route was the quickest way for him to get on the field, LSU redshirt freshman Joseph Addai made the decision in the off-season to become a hybrid in the Fighting Tiger backfield, where he would see time at tailback behind Domanick Davis and LaBrandon

Toefield, but he would also fill a vital need at fullback, where the Tigers were not as deep and experienced.

Although he hasn’t gotten the carries that Toefield and Davis this year, Addai again proved on Saturday night against Louisiana-Lafayette that when given the opportunity, he is more than ready to take more of the load next year when Davis graduates.

Addai gained 88 yards on 14 carries to lead LSU in rushing in the home opener against The Citadel, but had been mostly an afterthought in the next two games, rushing three times against Miami (Ohio) before sitting out last week’s game against Mississippi State.

On Saturday against the Ragin’ Cajuns, Toefield left the game early in the second quarter with a wrist injury, but Addai more than filled the breach, rushing for 98 yards on only 11 carries and a pair of touchdowns, catching two passes for 50 yards and again providing key lead blocks for Davis as the Tigers rolled to a 41-0 halftime lead and an eventual 48-0 homecoming victory.

The Houston native made the most of his first touch on LSU’s second drive, going over the vacated middle of the UL-Lafayette defense to haul in a Matt Mauck pass and rumble 42 yards to the Cajun 6 for his first career reception.

Not only was it Addai’s first career catch, but it also marked a rare pass to an LSU fullback. Last year, Solomon Lee, the Tigers’ regular fullback when they had a fullback in the offense, caught just three passes for 14 yards.

On the Tigers’ next drive, Addai caught an 8-yard pass to help LSU score its third TD of the opening quarter.

With Toefield already in the training room, Addai took charge on a drive midway through the second quarter, carrying three times for 21 yards and scoring his first TD from 10 yards out and a 34-0 lead with 7:08 remaining before halftime.

Davis retired to the bench in the second half with the game out of reach, and Addai made the most of his opportunity to shine, adding 45 yards on seven carries to the 53 he gained in the first 30 minutes, and he saved his best for last.

With the Tigers facing a fourth-and-1 from the UL-Lafayette 34, backup quarteback Marcus Randall pitched to Addai sweeping wide left. Not only did Addai pick up the first down, he broke three attempted Cajun tackles and sauntered down the sideline to a 34-yard touchdown, his longest career run.

Both of Addai’s touchdowns were set up with key blocks from his replacement at fullback, Kevin Steltz. Steltz, a walk-on from Rummel High in Metairie, will have the opportunity for more playing time as the Tigers return to SEC play, especially if Toefield’s injury keeps him out for an extended period of time and forces Addai to handle more carries.