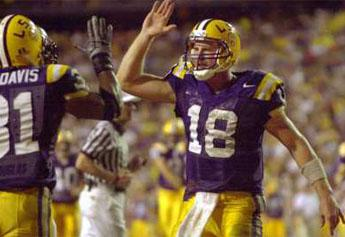 “We tried to let everybody get some experience tonight. League play is about to start now and it is time to get ready. The 24-hour rule is in effect and we are going to ready next week. They tried to do a lot of intimidating things to us tonight, but we just had to go out there and play ball. We are LSU and we have to go out there and win by playing the game.”

…On losing LaBrandon Toefield to injury
“That is just the nature of the game. Toe and I have a lot to talk about. All I can do is pray that it is not as bad as it is. We need him out there on that field. Hopefully, he will be back, but as a team we need to support him and make sure he is alright mentally.”

…On going into the Florida game next week
“Right now we just want to enjoy this win, but next week league play begins again. We are about to start playing some teams that are offensively potent. It is going to be a hostile crowd on the road. The last couple of years we haven’t played too well against them. Now, we have guys that have some experience playing them. We can’t do anything but get better.”

“You can’t say enough about how well the defense played tonight. They bailed us out several times tonight.”

…On losing LaBrandon Toefield to injury
“We have to support him. He works so hard, so if there is anyone who is going to come back from an injury like that it will be him. LaBrandon is a great running back. You can’t replace a guy like him.”

“It was important to be dominant tonight. We did not want to play to someone else’s level. We wanted to keep the intensity up. I thought this game was good for the state. I think we proved that LSU is the top football team in Louisiana. It was very important to shut them out tonight. Over the years when we have played them, UL-L has not really scored much. That is a mental boost for us. You try to get a shut out every game.”

…On playing Florida next week
“We are just going to try to go in there and dominate like we have been doing. We are going to play LSU football and play hard no matter who we play. You have to step up to another level when you play a team like them. You really can’t go into there and say this is not the same team they have been. They have outstanding players over there.”