It's Homecoming: LSU vs. UL-Lafayette 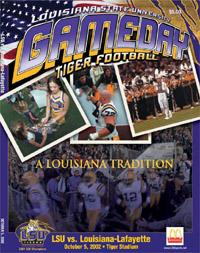 BATON ROUGE — For the first time since 1938 and the first time on Homecoming, LSU and UL-Lafayette (formerly Southwestern Louisiana) meet on the gridiron at 7 p.m. on Saturday in the friendly confines of Tiger Stadium. The live audio broadcast begins at 5:30 p.m. right here on LSUsports.net, while live stats begin at gametime.

The game will also be broadcast on TigerVision, LSU’s in-house pay-per-view network. Click here for information on how to get the game at your home or find an LSU alumni viewing party near you.

LSU (3-1, 1-0 SEC) holds a 19-0 record against the Ragin’ Cajuns dating back to 1902 and has outscored ULL, 864-19. However, UL-Lafayette (1-3) and first-year head coach Ricky Bustle have nothing in common with those pre-World War II thrashings. Bustle, a former offensive coordinator at Virginia Tech, shutout UAB — a team that came into Tiger Stadium two years ago and left with an upset — on Sept. 21 and is coming off a week off.

In the third game of a four-game homestand, the Tigers opened Southeastern Conference play last week by controlling the running game and sprinting past Mississippi State, 31-13. Domanick Davis compiled 286 all-purpose yards and a pair of touchdowns, as LSU outrushed the Bulldogs, 256-88.

The LSU defense, ranked first in the SEC and fourth in the nation in total defense, has allowed only 235 yards per game, 10 first-quarter points this season and nary a 100-yard rusher since last November. Meanwhile, no one dared to portend two years ago that the LSU defensive backfield would be lead the SEC and be ranked fourth in the nation while allowing only one passing touchdown and 131.2 yards per game.