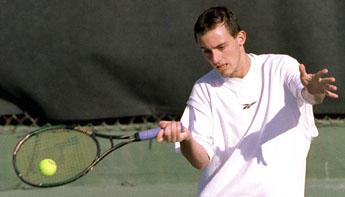 CHATTANOOGA, Tenn. — Junior Sebastian Rutka was the only LSU men’s tennis player to complete his first-round match in the pre-qualifying round of the ITA All-American Championship on Friday, as the team did not arrive until late in the morning and play was delayed due to rain.

Five other Tigers will play first-round matches on Saturday, while three LSU doubles teams will attempt to advance in the first round of the 128-team draw.

Rutka defeated Ball State’s Matt Laramore, 6-7(5), 6-3, 6-2, and will meet Manuel Lievano of Minnesota in the second round on Saturday. Lievano beat Wichita State’s Carlo Contente in the first round, 6-1, 6-3.