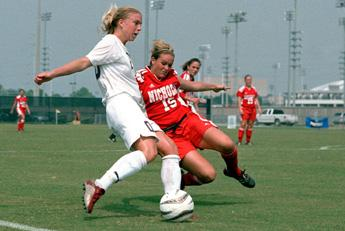 OXFORD, Miss. — The LSU soccer team earned a 2-1 victory over Ole Miss on Friday, as the Tigers handed the Rebels their first loss of the season in the teams’ Southeastern Conference opener here in Oxford, Miss.

“We played a very good team tonight,” said LSU head coach George Fotopoulos. “Ole Miss was undefeated and they are a very well-coached team. It was a battle tonight. We lost two of our starters early on and I have to take my hat off to my team because we battled back.”

With 6:43 remaining in Friday’s hard-fought contest, LSU’s Mandy Heintz scored her seventh game-winning goal of the season as she took an entry pass from Jenn deHay and nudged a shot passed the Rebels’ goaltender Brittany Gillespie. The goal proved to be Heintz’ 18th of the season. LSU’s junior from San Antonio, Texas, leads the nation in goals.

LSU improved to an overall record of 9-1 with the victory and earned a 1-0 mark in SEC play. With its first loss of the season, Ole Miss fell to 8-1-1 and dropped to 0-1 in the conference.

At exactly the 25:00 mark in the Western Division contest, LSU’s Stephanie Keating gave the Tigers an early 1-0 lead as she launched a direct kick into the left-hand corner of the net from 25 yards out. Keating, the Tigers’ junior from Vero Beach, Fla., earned her sixth goal of the season on the play.

The Tigers took a 1-0 lead into halftime despite being outshot by Ole Miss, 10-1. LSU’s sophomore goaltender Robyn DesOrmeaux registered the defensive play of the half with only 10 seconds remaining as she earned a sliding save on a breakaway shot by Ole Miss’ sophomore Kelly Renie. The save was DesOrmeaux’s second of the half.

“I have to give a lot of credit to Ole Miss,” Fotopoulos said. “They played really well tonight and they have a great team. They are going to win a lot of games tonight, but we work hard and we are a blue-collared team. I don’t care if we win ugly, as long as we win.”

Ole Miss evened the score at 1-1 with a goal from sophomore Karen Hall at the 56:15 mark in the game. The Rebels’ midfielder took a crossing pass from Amy Sample and sent a one-timer into the far right corner of the net. The equalizing goal proved to be Hall’s fifth of the season.

LSU’s deHay nearly gave the Tigers a 2-1 lead with 15:10 remaining in the contest as she gathered a rebound in the box and rifled a shot that caromed off of the crossbar. Ole Miss’ goaltender was then able to collect the errant shot and kicked it out of bounds.

The LSU soccer team will next be in action on Sunday, Oct. 6, as the Tigers complete their weekend road trip against the Mississippi State Bulldogs at 1 p.m. in Starkville, Miss.