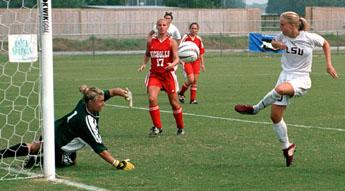 OXFORD, Miss. — The LSU soccer team will compete in its first Southeastern Conference contest of the season on Friday, as the Tigers take on the undefeated Ole Miss Rebels at 7:30 p.m. here in Oxford, Miss.

“This is a really big weekend for us,” said LSU head coach George Fotopoulos. “Both Ole Miss and Mississippi State have very talented teams and we haven’t played a top-caliber team since Florida State. I think that we will probably start off a bit sluggish in each game this weekend, but we have the talent and the ability to strongly compete with both of these teams.”

LSU heads into Friday’s SEC opener with an 8-1 overall record and has earned shutout victories in its previous six contests. The Tigers are in the midst of a seven-game winning streak and have not allowed a goal in a school-record time of 540:50. LSU has not given up a goal since Sept. 8, in the Tigers’ 2-1 victory over 15th-ranked Florida State.

Ole Miss enters the SEC Western Division matchup as the only undefeated team in the conference. The Rebels own an 8-0-1 record on the season and have outscored the opposition 23-8. Ole Miss’ lone blemish of the year was a 2-2 tie against Wyoming on the road Laramie, Wyo., on Sept. 13.

“They (Ole Miss) have been playing some really good soccer this season,” Fotopoulos said. “We beat them 3-0 last year and believe me they didn’t forget about it. Ole Miss will want to get some revenge from last year and we’re playing at their home field. Their fans are going to be rowdy and who knows what the weather will be like with the hurricane coming through the area.”

Last season, LSU upended the Rebels 3-0 in Baton Rouge at the LSU Soccer Complex. The win proved to be the Tigers’ only SEC victory of the season and their first over Ole Miss since 1999. The all-time series record between the conference rivals is knotted at 3-3. LSU has outscored Ole Miss 14-12 in the six contests.

The LSU soccer team will look to extend its winning streak to eight-straight games on Friday, as the Tigers face the undefeated Ole Miss Rebels at 7:30 p.m. here in Oxford, Miss.