LSU Ranked No. 6 in SI Poll of College Athletics 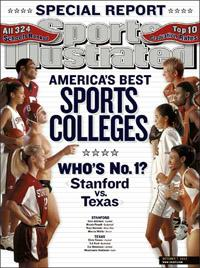 BATON ROUGE — The LSU athletics program has been ranked No. 6 in the nation in the latest edition of Sports Illustrated, which hit the newsstands on Wednesday.

Sports Illustrated determined its 2002 rankings by looking at the school’s major sports and Olympic sports, how each team ranked in the Sears Cup all-sports standings, and range of recreational facilities.

Texas ranked No. 1 in the nation followed by Stanford, Oklahoma, Florida and South Carolina. Other schools in the top 10 include Minnesota at No. 7, North Carolina, Tennessee and Michigan.

Of LSU, Sports Illustrated says “the Tigers won the men’s and women’s track titles, finished No. 7 in football and led the nation in baseball attendance for the seventh straight year. Alum Shaquille O’Neal had a decent year too. Few college arenas rock harder than Tiger Stadium and the Deaf Dome.”

Last year, LSU finished the season ranked No. 10 in the Sears Cup standings. The Tigers also had 18 of their 20 teams compete in postseason play in 2001-02, with 17 of those teams being invited to NCAA Tournament play or a bowl game.