Hokies Capitalize on Mistakes for 26-8 Win Over LSU 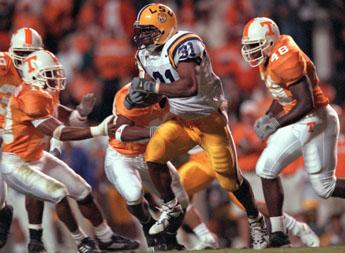 BLACKSBURG, Va. — Stymied by first-game mistakes and misfortune, the 14th-ranked LSU football team fell to the 16th-ranked Virginia Tech Hokies, 26-8, and lost a season opener for the first time since 1995 on Sunday afternoon at Lane Stadium.

The Tigers fell to 0-1, while Virginia Tech improved to 2-0.

Quarterback Matt Mauck led the Tigers’ offensive effort, completing 15-of-35 passes for 134 yards. He was sacked four times. His leading receiver was Michael Clayton with five receptions for 49 yards. LSU managed only 80 rushing yards, led by LaBrandon Toefield’s 46 on 10 carries and a touchdown.

The LSU defense put forth a valiant effort, holding the Hokies to 231 yards of total offense and only 65 in the air.

All things considered for a season opening game in front of a record crowd on a ranked opponent’s new turf — the Tigers recovered from a fumble in their own territory unharmed early; had a punt blocked at their 22-yard line; had a short punt out of their endzone that led to a 27-yard Hokie touchdown; had a punt return for a touchdown called back due to a penalty before the offense even took a snap; had an easy first-down in Tech territory dropped and kicked into a defender’s arms; had eight penalties for 61 yards; punted nine times for only 27.2 yards per punt; and were 1-of-13 on third downs — the Tigers had a chance to threaten the Hokies with six minutes to play.

However, the discrepancy in field position and time of possession (34:04 to 25:56) over the first 48 minutes of the game could not be overcome by the best of efforts.

After the Hokies opened the game by going three yards on three plays, LSU’s preseason All-Southeastern Conference return specialist Domanick Davis returned a 58-yard punt 81 yards for a touchdown that was called back due to a block in the back by Ryan O’Neal.

LSU began the drive on its 28-yard line and drove into Virginia Tech territory before facing a 3rd down and 10 at the Tech 46. Mauck scrambled to the 40 before being upended short of the first down.

The Tigers stopped the Hokies and began another drive from their 20. On 1st and 10 from the 33, Toefield rumbled for a first down before fumbling to the 44. Virginia Tech recovered. Center Ben Wilkerson injured his right knee on the play.

More first-game mistakes cost the Tigers deep in their own territory, as penalties and a fumble forced LSU’s Jones to punt from deep in the endzone. Jones 39-yard punt was returned to the 27 yard line. Six plays later, Kevin Jones ran for a 2-yard touchdown around the right end. Virginia Tech led 7-0 with 30 seconds remaining in the first quarter.

A blocked punt after an LSU three-and-out gave the Hokies the ball at the LSU 29. Less than three minutes after the first touchdown of the game, Lee Suggs ran in from the 6 to give the Hokies a 14-0 lead with 12:58 remaining in the half.

LSU’s defense stepped up on a pair of occasions late in the half, as the Hokies drove the ball near field-goal range before being stopped and pushed back.

Without advancing a yard, LSU went three-and-out to open the half and give the ball to the Hokies at midfield. Virginia Tech was forced to settle for a Carter Warley 41-yard field goal with 11:22 left in the third quarter. LSU trailed 17-0.

Another three-and-out by LSU changed field position slightly, as Virginia Tech began the drive at their 39. However, the Hokies were able to pin the Tigers at their 7 after a 50-yard punt by Vinnie Burns.

For the first time since the Tigers’ first series, Mauck was able to get the Tigers some breathing room and change field position, as the sophomore quarterback drove to the Virginia Tech 40 before being stopped on 3rd-and-3. On the drive, Mauck completed passes for first downs to Toefield and Michael Clayton, as well as a 9-yarder to Shyrone Carey.

Jones punted the Tigers to the Tech 13 where they took over with 3:46 to play in the third quarter. Three plays later, the LSU defense had forced a punt.

Just when it looked like momentum had swung in favor the Tigers after getting the ball back in Tech territory, Carey dropped a pass third-down at the Hokie 30-yard line and kicked it up in the air to Tech linebacker Vegas Robinson who returned it to the 36.

Once again, LSU looked to have the Hokies stopped short of field-goal range, but Jones ran away from five Tiger defenders behind the line on 3rd-and-11 for a 34-yard run to the 2. Suggs ran around the right side for an easy score and a 24-0 lead with 14:01 left in the game.

Mauck completed five consecutive passes for 52 yards to drive 82 yards in 10 plays to give the Tigers their first score of the season. Toefield scored from 1 yard out, his 25th career touchdown to move him into eighth place in LSU’s career rushing TD list.

The two-point conversion from Mauck to Clayton was good in the right flat to cut the lead to 24-8 with 10:00 to play.

However, the Tigers lost the ball on downs twice and had a punt blocked out of the endzone for a safety in the final seven minutes to end the game.

The Tigers return to action on Sept. 7 for their home opener against Division I-AA opponent The Citadel at 7 p.m. in Tiger Stadium. Live audio begins at 5:30 p.m. on LSUsports.net.