Volleyball Drops Heartbreaker to No. 17 Aggies, 3-2 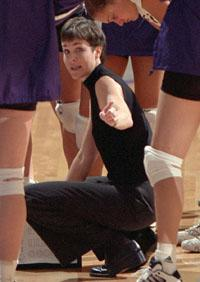 COLLEGE STATION, Texas — After leading the match 2-0, the LSU volleyball team could not hold off the nationally-ranked Texas A&M Aggies, falling 3-2 in the final match of the Texas A&M Invitational on Sunday afternoon in G. Rollie White Coliseum.

With the loss, the Tigers fall to 2-1 on the season, while No. 17 Texas A&M improves to 3-0. LSU defeated Texas-San Antonio and Alcorn State in three games to start the tournament on Friday.

“I am really proud of the effort today,” said LSU head coach Fran Flory. “I thought we played with great intensity and I think this was one of the best matches that I have been associated with in my five years at LSU. We’re not supposed to be as good as we can be in the opening weekend of the season but if this is where we are starting from, we are going to have a great year.

“I am disappointed in the outcome because I think we kind of gave it away in the end with some unforced errors,” continued Flory. “When you are playing a team as highly ranked as Texas A&M, you just can’t give points away.”

Four Tigers reached double-figures in kills and digs, with Jennifer Hampton recording her second double-double of the year. Lauren Cuyler led the way with 15 kills, while Hampton recorded 12, Kyra Lancon had 11 and Regan Hood had 10.

Jenny Greco, the designated libero for the match, recorded a team-high 14 digs. Katie Kubena had 13 digs, Hampton recorded 12 and Rachel Pittman rounded out the quartet with 11 digs. Hood and Lancon led the way defensively with six blocks each.

In the first game, the Tigers jumped out to a 4-1 lead and held the lead until Texas A&M came back to tie the game at 17. The Aggies then took just their first lead of the match since leading 1-0. The score went back and forth, with no team taking more than a two-point lead.

With the game tied at 27, LSU used a kill by Jennifer Hampton and an ace by Kyra Lancon to send the match to game point, but could not convert. Texas A&M came back to tie the game before taking a 30-29 lead, but the Tigers held off the game point. Three straight points by LSU, capped by a kill by Hampton from the left side, gave the Tigers the 32-30 win.

In the second game, neither team was able to gain an advantage until LSU went on a 6-0 run to take the 11-5 lead. The run was aided by a pair of blocks by Reagan Hood and Katie Kubena and an ace by Rachel Pittman. From that point, the Aggies could get no closer than three points as LSU led by as many as seven, 27-19.

Texas A&M tried to rally, scoring five of the next six points to close the lead to 28-24. The Tigers then put the game away, 30-24, on a solo block up the middle by Reagan Hood. LSU took a 2-0 lead into the locker room.

With the match on the line, the Aggies came out and took the lead to start game three and never relinquished it. Texas A&M used four aces and 15 kills to take the game 30-16. The Tigers hit only .056 for the game, compared to a .355 clip for the Aggies.

The Aggies came out and used powerful serves to keep LSU off balance in the  fourth game. Texas A&M took an early lead and led by as many as eight. The Tigers would not go away and cut the Aggie lead to four, 27-24. End the end, Texas A&M held off the rally, winning the fourth game, 30-24, to send the match to a fifth and decisive game.

In the final game, the score went back and forth until LSU took a two-point lead, 7-5 on a lift call and an attacking error by the Aggies. Texas A&M fought back to tied the game at eight and then took an 11-8 lead and never lost the lead. The Aggies sealed the victory on a block of an Hampton kill attempt on the left side.

The Tigers will travel to New Orleans for the Sugar Bowl Classic next weekend, hosted by Tulane University. LSU will face in-state rival Louisiana Tech on Friday at 4:30 p.m. before battling UNO on Saturday at 11:30 a.m. The Tigers close out the tournament against Tulane at 7 p.m.