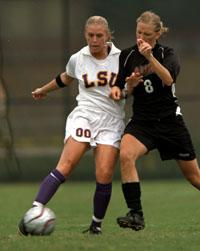 “We played really well as a team out there,” said LSU head coach George Fotopoulos. “Our defense did an outstanding job and we had a lot of scoring opportunities throughout the game. I’m really proud of how we handled the environment here on the road and it’s a great start for our season.”

LSU’s first goal of the evening came on a 10-yard shot from junior forward Heintz with 17:34 remaining in the contest. The goal proved to be the game-winner and was set up nicely by Laura Klatter. The assist was the first of Klatter’s career.

With the win, LSU earned its fifth-consecutive, season-opening victory and improved to 1-0 on the season. The Tigers have notched wins in season-openers against McNeese State, Troy State, Louisiana-Monroe and South Alabama dating back to 1998. LSU’s last season-opening loss was in 1997 to North Carolina State, 2-0.

“It’s always good to get a victory in your first game,” Fotopoulos said. “Every team wants to get the season started on the right foot and I think that we did a good job of that tonight.”

Drake, the Tigers’ sophomore from Lawrenceville, Ga., added the second goal of the non-conference contest with only 3:21 remaining. The goal was scored as she came up from her forward position and rifled a shot into the net after it was rebounded off of Stephen F. Austin’s goalie Natascia Michalezki.

The Ladyjack defense proved to be extremely busy on Saturday, as the Tigers attempted 34 shots and Michalezki was forced to haul in 14 saves. In contrast, LSU’s defense played extremely well and only allowed one shot on goal. Sophomore goaltender Robyn DesOrmeaux notched the second shutout of her career with the 2-0 victory.

The Tigers’ third-year head coach, Fotopoulos, moved into first place on LSU’s all-time win list. With the victory over Stephen F. Austin, he surpassed former coach Miriam Hickey and recorded his 23rd victory at the helm of the LSU soccer program.

LSU will next be in action on Sept. 6, as the Tigers travel to Tallahassee, Fla., to play the Miami Hurricanes on the campus of Florida State University. The Tigers will then play the 10th-ranked Seminoles on Sunday.