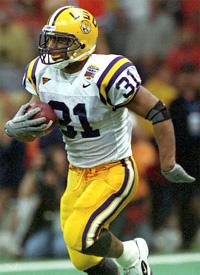 The Tigers (0-0) traveled from Baton Rouge Metropolitan Airport to Roanoke, Va., for an overnight stay before taking the hour bus ride to Blacksburg’s Lane Stadium at Worsham Field on Sunday morning. Game time is set for 1:30 p.m. CDT.

The game can be heard live with “The Voice of the Tigers” Jim Hawthorne along with Doug Moreau right here on www.LSUsports.net beginning with the pregame show at noon CDT. Stay tuned for the postgame show as well.

ABC will broadcast the matchup between the Tigers and Hokies to a national television audience beginning at kickoff.

There are no ticket available for the game unless season tickets are purchased from Virginia Tech.

The Tigers have won six-straight season opening games dating back to 1995, the longest such streak since winning eight straight from 1962-69. In 1995, the last time the Tigers faced a ranked team on the road to open the season, third-ranked Texas A&M defeated the Tigers, 33-17, in former coach Gerry DiNardo’s debut. LSU has an all-time record of 76-27-5 (.727) in openers.

Sophomore quarterback Matt Mauck leads the Tigers on the field for the first start of his collegiate career. Mauck, who came off the bench in relief of Rohan Davey to lead the Tigers to a come-from-behind victory over No. 2 Tennessee in the SEC Championship game in 2001.

After spending three years as baseball player in the Chicago Cubs minor league organization, Mauck, 23, redshirted the 2000 season before appearing in three games in 2001.

Mauck is flanked by a stable of skill-position players whose combination of game experience and youth should help create the identity of the 2002 squad.

In the backfield, senior all-purpose back Domanick Davis (1,436 all-purpose yds. in ’01) and LaBrandon Toefield (992 rushing yds. and 19 TD’s) should share the duties, while redshirt freshman tailback-turned-fullback Joseph Addai has been too good in fall camp to keep off the field.

Toefield has fully recovered from a torn left ACL suffered in the second quarter of the SEC Championship Game. Davis, who will return kickoffs and punts, give the defense a different look than his bullish counterpart.

Outside of the hash marks, Mauck will look for sophomore Michael Clayton (47 rec., 754 yds., 6 TD’s in ’01), along with seniors Jerel Myers (39 rec., 461 yds.) and Reggie Robinson, who redshirted the 2001 season with a neck injury. NCAA track champions Bennie Brazell and Devery Henderson, along with Shyrone Carey and true freshman Skyler Green add speed and depth to a deadly receiving corps.

Even without senior end Kenderick Allen who’s recovering from surgery, LSU’s defensive front four of LE Marcus Spears, LT Byron Dawson, RT Chad Lavalais and RE Marquise Hill may prove to be the best in the SEC by season’s end.

Behind this juggernaut is an experience linebacking crew led by Bradie James (MIKE), Jeremy Lawrence (SAM) and Lionel Turner (WILL). Each is backed up by a talented, yet inexperienced replacement.

For the first time in several years, the Tigers have both depth and experience in the defensive backfield. Seniors FS Damien James, SS Norman LeJeune and RCB Demetrius Hookfin, along with junior LCB Randall Gay will start the game for the Tigers. Behind them, juniors Travis Moses, Adrian Mayes and converted receivers Jack Hunt and Corey Webster are able to spell the starters at a moment’s notice.

Virginia Tech (1-0) comes off a dominant performance against hapless Division I-A opponent Arkansas State on Aug. 25 in the Hispanic College Fund Football Classic. With three TD’s on offense, defense and special teams, the Hokies took advantage of seven turnovers and scored 56 first-half points on the way to a 63-7 victory.

Star running backs Lee Suggs and Kevin Jones — tabbed “The Untouchables” by the University’s publications — rushed for 118 yards on only 11 carries with two scores. The Hokies piled up 288 net rushing yards while passing for 203.

Before pummeling Arkansas State, the Hokies lost four of six to end the 2001 season, including a 30-17 loss to Florida State in the Gator Bowl. Virginia Tech was 4-2 at home last season.

Virginia Tech’s Lane Stadium was renovated prior to the 2002 season in a project called “The Game Plan.” The $36 million project expanded the stadium’s South endzone and added 11,000 seats to move capacity to 65,115.